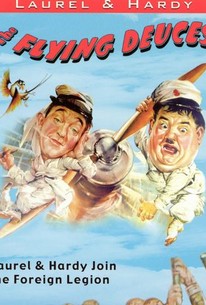 Stan and Ollie join the Foreign Legion so that Ollie can forget an unhappy romance. As luck would have it, they become involved in attempting to smooth out the messy love affair between an officer and his fiancee. After being in the Legion for as long as they can take it, they want their normal lives back. Ollie insists on their release just as they realize they're going to be shot at sunrise for their rebelliousness. The pair attempt an escape via airplane. Lots of laughs, nostalgia, and action-packed stunts take place including a dance routine to "Shine on Harvest Moon."

Charles B. Middleton
as Commandant

Eddie Borden
as Legionnaires Knocked Out by Cork

Sam Lufkin
as Legionnaires Knocked Out by Cork

Kit Guard
as Other Legionnaire

Billy Engle
as Other Legionnaire

Jack Chefe
as Other Legionnaire

Clem Wilenchick
as kapral
View All

Critic Reviews for The Flying Deuces

A comeback film for the lauded Stan Laurel and Oliver Hardy comedy team.

Minor Laurel & Hardy knockabout, albeit with some pearly moments.

It's not bad, but it ought to be better with those stars and that director.

Audience Reviews for The Flying Deuces

Failed romance sends the boys to the African Desert and the French Foreign Legion where their usual antics fail to make them many friends. The comedy is old hat mostly, even for them, and never rises above the dollar grab that this seems to be. Their charm gets us through, but only just barely. A song and dance bit in the middle showcases what the boys could do when they gave a damn.

Its Oliver and Stan in the French Foreign Legion. Good clean fun.