The Fog of War: Eleven Lessons from the Life of Robert S. McNamara2003

The Fog of War: Eleven Lessons from the Life of Robert S. McNamara (2003) 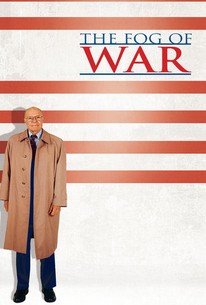 Critics Consensus: The Fog of War draws on decades of bitter experience to offer a piercing perspective on the Cold War from one of its major architects.

Critics Consensus: The Fog of War draws on decades of bitter experience to offer a piercing perspective on the Cold War from one of its major architects.

Critic Consensus: The Fog of War draws on decades of bitter experience to offer a piercing perspective on the Cold War from one of its major architects.

The Fog of War: Eleven Lessons from the Life of Robert S. McNamara Photos

Former Secretary of Defense Robert S. McNamara is the sole focus of documentarian Errol Morris' The Fog of War, a film that not only analyzes McNamara's controversial decisions during the first half of the Vietnam War, but also his childhood upbringing, his education at Berkeley and Harvard, his involvement in World War II, and his later years as president of the World Bank. Culling footage from almost 20 hours of interviews with the Secretary, Morris details key moments from McNamara's career, including the 1945 bombing of Tokyo, the Cuban Missile Crisis, and President Kennedy's suggestions to the Secretary that the U.S. remove itself from Vietnam. Throughout the film, the 85-year-old McNamara expounds his philosophies on international conflict, and shows regret and pride in equal measure for, respectively, his mistakes and accomplishments.

Critic Reviews for The Fog of War: Eleven Lessons from the Life of Robert S. McNamara

Although Errol Morris's film takes us through the nasty dramas behind various wars, few of McNamara's clarifications come as a surprise.

An engrossing and illuminating documentary.

For those of my generation, the true resonance in the film may be in the constant juxtaposition between the then and the now of the McNamara life.

Offers a couple of hours of brilliant clarity amid the noise and chaos.

A polarizing figure, McNamara speaks with almost unthinkable candor about his role in The Vietnam and Cold Wars with equal parts introspection, denial, self-aggrandizement, and contrition.

It's difficult to imagine anyone from George W. Bush's administration coming forth with such awe-inspiring, agenda-free candor, contrition, insight and misgivings about America's foreign policy. A documentary about morals, respect and blind luck.

A great and disturbing film.

This is the most culturally significant documentary imaginable and should be mandatory for repeated viewing by all public officials the world over.

Even handed, but never to a fault, this critical and at times even touching examination of Robert McNamara's life and role in the Cold War is as brilliant as I hoped it would be.

[It] raise[s] complex questions about man's role in that most awful and inherent of human characteristics: our penchant for war.

Audience Reviews for The Fog of War: Eleven Lessons from the Life of Robert S. McNamara

A mesmerizing, slightly offbeat documentary from the great Errol Morris ("The Thin Blue Line") concerning former Secretary of Defense Robert S. McNamara and his experiences in both WWII and Vietnam, and looking back on his decisions and how to pertain to the days we live in now. McNamara appears to be a very likable, flawed individual (like we all are) who seems to be historically misunderstood given his reputation that he screwed up the Vietnam War quite badly. Instead we get an honest, genuine look at a man who gives a fair look at himself and his decisions, admits to his mistakes, but remains proud of his many accomplishments. Definitely a more humanizing look at a politician, in a day and age where people love to eat these people for lunch. One of the better documentaries I can recall, and anyone from the Kennedy-Johnson era should give this a look.

Robert McNamara explains his life during the two World Wars and the Vietnam War. For those of us who are students of history but didn't live during the times of the Vietnam War and WWII, this film doesn't have the resonance it might otherwise have. What I see is McNamara the apologist and McNamara the regretful soldier, personalities that he freely oscillates between almost at will. He wags his finger at the camera so many times that I felt like he was giving me, a small boy, a lecture on how to live. The film becomes a compilation of McNamara saying, "I did my best, but I fucked up, but damn it, I did my best!" Overall, I think this film is a good introduction to people who know little about the wars, but it ultimately devolves into a talking head documentary.

Not a whole lot to say other than see it!

Ranks amongst the most fascinating documentaries I have ever seen. More than a Vietnam War or politics or war itself, The Fog of War is a testimony to the life of Robert MaNamara, as if we the audience are godlike watching while a human being explains his life, his passions, his mistakes, asking for foegiveness and compassion in the face of history and death.

The Fog of War: Eleven Lessons from the Life of Robert S. McNamara Quotes