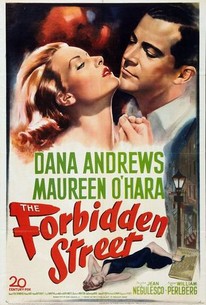 The Anglo-American co-production Britannia Mews was released in the U.S. as The Affairs of Adelaide, then reissued as Forbidden Street, the title it carries today. Set in the Victoria era, the film focuses upon Adelaide (Maureen O'Hara), a young lady of good family who renounces both name and fame when she marries an impoverished artist (Dana Andrews). When her husband is killed in an accident, Adelaide is blackmailed by a spiteful old hag (Dame Sybil Thorndike) who claims that the girl killed her spouse. Enter a handsome young barrister who is the living image of Adelaide's late husband (and who, accordingly, is also played by Dana Andrews). He extricates Adelaide from her plight, reunites her with her family, and along the way falls in love with her himself. Ring Lardner Jr. adapted Britannia Mews from a novel by Margery Sharp. ~ Hal Erickson, Rovi

June Allen
as Adelaide as a Child

Anthony Lamb
as Treff as a Child

Suzanne Gibbs
as Alice as a Child

Diane Hart
as The Blazer

Heather Latham
as Blazer as a Child

Critic Reviews for The Forbidden Street

Only Miss Fay Compton as Miss O'Hara's mother and Mr. Anthony Tancred as her brother bring a touch of reality into this shadow play, surely, so far, the most disappointing film of the year.

There are no featured reviews for The Forbidden Street at this time.