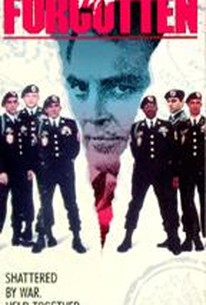 The Forgotten deserves at least a small niche in TV history as the first-ever TV movie made especially for the USA cable network. Based on a story by Vietnam veteran Paul Staples, the film concerns six American Green Berets, held for 17 years in a Vietnamese POW camp. They are finally released in secret, during a delicate trade-talk session between Vietnam and the United States. Keith Carradine, the ex-prisoners' CO, begins to suspect that government-man Stacy Keach, who is in charge of the debriefing, may be pursuing a hidden agenda that will result in the early deaths of Carradine and the five men under his command. Stacy's brother James Keach directed Forgotten and also co-wrote the script with another of his stars, Steve Railsback. First aired April 26, 1989, The Forgotten set the "viewer discretion" standard for all future USA TV movies with its grim flashback sequences depicting the torture methods of the NVA.

Sandra Will
as Major White

Sreten Mokrovic
as Policeman
View All

Critic Reviews for The Forgotten

There are no critic reviews yet for The Forgotten. Keep checking Rotten Tomatoes for updates!

There are no featured reviews for The Forgotten at this time.