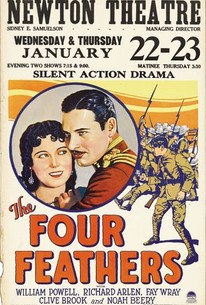 This was the third screen version of A.E.W. Mason's oft-filmed novel about one soldier's triumph over cowardice and was the last rendering during the silent era. Here, Richard Arlen stars as Harry Faversham, the British officer who resigns rather than fight against rebels in Egypt. When four of his former colleagues present him with feathers signifying their belief that he's a coward, Faversham has a change of heart, and posing as an Arab, he goes on a potentially deadly mission to rescue captured British forces. Fay Wray also appears as Ethne Eustance. Wray and directors Merian C. Cooper and Ernest B. Schoedsack would reunite four years later for another classic tale of adventure, King Kong.

Philippe De Lacy
as Harry, as a Boy of 10

Noble Johnson
as Ahmed
View All

There are no critic reviews yet for The Four Feathers. Keep checking Rotten Tomatoes for updates!

There are no featured reviews for The Four Feathers at this time.