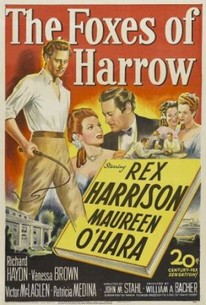 The Foxes of Harrow Photos

Frank Yerby's Foxes of Harrow was one of those long historical novels so popular in the 1940s. 20th Century-Fox boiled the novel down into 118 minutes' worth of essentials for this film version. In antebellum New Orleans, roguish Irish gambler Rex Harrison buys his way into society--something he couldn't do in his homeland because he is illegitimate. Sequestering himself in a mansion won in a card game, Harrison courts Southern belle Maureen O'Hara, but their subsequent marriage is befouled by Rex's incessant womanizing. Though tempted to walk out for good, O'Hara stays by her husband's side after he loses his fortune, hoping that the impoverished Harrison will now behave more responsibly. ~ Hal Erickson, Rovi

Gene Lockhart
as The Vicomte

Dennis Hoey
as Master of Harrow

Joseph Crehan
as Captain
View All

Critic Reviews for The Foxes of Harrow

There are no critic reviews yet for The Foxes of Harrow. Keep checking Rotten Tomatoes for updates!

There are no featured reviews for The Foxes of Harrow at this time.

The Foxes of Harrow Quotes