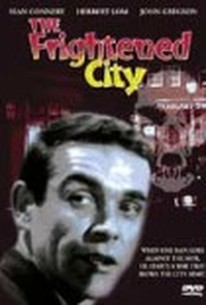 Sean Connery plays one of his early roughneck types in the British gangster picture Frightened City. The story takes place in a rundown section of London, where the citizens are held in the grip of extortionists. After several months of gang warfare, the six major "protection" rings agree to bury the hatchet and combine their efforts under the leadership of a mob boss (Herbert Lom). One of the gangsters opposes the mobster's rule, and is promptly rubbed out. Paddy Damion (Sean Connery), the dead man's best friend, swears revenge. After a bloody confrontation, Damion agrees to provide information to the police -- after plea-bargaining himself into a light sentence. ~ Hal Erickson, Rovi

Critic Reviews for The Frightened City

It's richly enjoyable stuff and the early-60s London locations are a treat.

Audience Reviews for The Frightened City

There are no featured audience reviews yet. Click the link below to see what others say about The Frightened City!