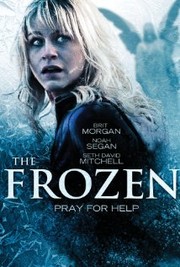 Zed C
½ January 30, 2016
3/10 - This my friends... THIS is what happens when you go to film school, to lean to make movies. Artsy, fartsy, pointless "beauty" shots, that pad out a flimsy, poorly written script, with a payoff so pointless, I thought my eyes were going to break from rolling back so hard in my head. This was literally a by the book script, that had back and forth character arcs (he's right, then she's right, then he's a dick, then she's a bitch), contrived reason for going out alone in the woods (romantic spot to propose) and the ever annoying pregnancy angle. Seriously, in the first scene it's revealed she's pregnant, and the rest of the movie, she's doing that "stomach grabbing" shit, usually with a pan down, or a cut to her hand on the stomach. STOP THAT SHIT! Any movie or TV show, when the woman puts her hand on her belly and rubs, it isn't gas... she's pregnant. No twist, no surprise... knocked up.

The only reason to even consider watching this, was a solid performance by Britt Morgan in the lead. I've seen her in a few other things, and she's go some good acting chops.

So yea... don't watch this. Save yourself 90min of eye rolling. I won't give away the ending, but... they crash their snowmobile, then weird shit starts happening. Do the math. Avoid'r

Abb J
November 24, 2015
The Frozen: An ironic tale of survival begins when a couple of newbie campers get stranded in the wilderness and find themselves followed by a mysterious stranger. The meandering plot is often tedious, and the ending a knockoff, but surprisingly, it is still worth the wait, a far cry better than most low budget films. B-

Farah R
½ August 20, 2015
Although dull and painstakingly slow, the plot twist ending is worth the wait. With a successful leading actress and a satisfying ending, The Frozen stands good on the thriller/horror scale.

Marah R
August 20, 2015
The movie starts out really slow and drags up until the end where its best plot is revealed as a twist of the protagonist being dead the entire time.

Connor R
½ August 5, 2015
I'm only halfway through this flick and I can tell you I've already lost all interest in it. Not even the greatest horror ending since the Sixth Sense could salvage tis snoozefest.

Kira N
May 30, 2015
the storyline alone was so dumb down any one will know what is next save your time and go see something better

Cameron M
April 6, 2015
With familiar set ups, predictable plot points, all trudging build-up to its unoriginal twist ending, aside from its nice landscape to look at, there is nothing new or interesting about The Frozen.

Brian C
June 29, 2014
Nothing particularly new or original offered here, but the story was good and the acting was very good. Although when Mike goes missing Emma seems to recover relatively fast her situation is quite harrowing being followed by a mysterious stranger throughout her wanderings.

Claudette A
½ June 23, 2014
What an original storyline. I wasn't sure at the end if she was really dead or not and the guy was leading her on.

Daphne M
May 26, 2014
Well started out thinking this was going to be pretty good. Then half way through really wanted to either fast forward or just end it all. By the time it was over I was satisfied that I actually hung in there. It was overall ok but ughhh took too long to get the point of it all.

Mary R
½ April 24, 2014
This movie was very well made with numerous twists and turns. From the moment this couple arrived at their destination they were plagued with continuous problems one after another along with the feeling they were being stalked by someone or something. Extremely suspenseful and with many twists and turns leading to a very unpredictable ending.

Chris B
½ April 18, 2014
Booooring!! Talk about a snoozer! Some parts were okay, but they would have been better as gifs on reddit in /r/creepy. The ending was pure crap. Don't waste your time or bandwidth streaming this one.

Nothing special to write home about for this movie, but I was not as bored with it as I thought I would be after the first 5 minutes of the film. An okay one timer: for a couple to watch on a slow evening.

The minuses (-) that the film had are: the soundtrack was generic guitar in a lot of parts; other parts it was not so great at building the suspense, & when Britt Morgan had taken over on her own the feeling of loneliness was so greatly felt a lot of the entertainment was-taken by it.

I give this thriller suspense film a C + (Common)

Jay M
February 15, 2014
Nothing special to write home about for this movie, but I was not as bored with it as I thought I would be after the first 5 minutes of the film. An okay one timer: for a couple to watch on a slow evening.

The minuses (-) that the film had are: the soundtrack was generic guitar in a lot of parts; other parts it was not so great at building the suspense, & when Britt Morgan had taken over on her own the feeling of loneliness was so greatly felt a lot of the entertainment was-taken by it.

I give this thriller suspense film a C +.

Bill S
January 31, 2014
Movie started Ok, then suspense, then boredom , then at last and least a good explanation for a twist but good ending. watch while doing bills or something

Ed C
December 15, 2013
One line summary: An old theme (the dead admitting they are dead) not done all that well.

Emma and Mike go for a trek through winter snow in Colorado. They discuss their relationship, not always amicably.

They have a snowmobile accident far from contact with other people.

Will either of them survive?

Cinematography: 7/10 If you love winter snow and ice, this will be a feast for you. The backgrounds are often washed out, and now and then there is camera shake. Still, there is a lot of beautiful footage.

Sound: 5/10 There was some creepy music, but on the whole, the sound was not a factor, which is disappointing. The sound levels were ridiculously bad. When I had the volume up for conversation, the ending credits came out blaring.

Acting: 3/10 I liked Brit Morgan in True Blood, but not so much in this one. Seth David Mitchell was one of the producers, and I wished he had kept to that exclusively. Noah Segan might as well have been a piece of cardboard.

Screenplay: 2/10 The two main characters die fifteen minutes in. That is where I started to lose interest. The next 79 minutes did not add much of anything; bickering can be found just about anywhere, as can footage about incompetence. The conceit of the film is that 'you are not dead until you realise you are dead' is old and tired. This remake was not an improvement over older, better works on the same theme.

Little D
½ December 15, 2013
It started off a little bit interesting, but the ending was really unoriginal and kind of dumb. It's not really much of a horror movie....

Tim C
½ November 28, 2013
Not to Shab, a few good twists and definitely different kind of story, worth seeing especially for a Winter Thriller Night