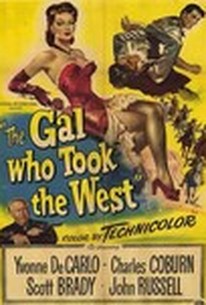 The Gal Who Took the West Photos

For some reason, whenever Universal used the word "Gal" in a film's title, Yvonne de Carlo usually headed the cast. In Gal Who Took the West, de Carlo plays Lillian Marlowe, an New York songstress who heads Thataway. She becomes the romantic bone of contention between the feuding O'Hara cousins, Grant (John Russell) and Lee (Scott Brady). The hostilities boil over into an all-out range war, and federal troops are summoned. Can Lillian succeed where other, better-armed negotiators have failed. The lighthearted nature of Gal Who Took the West is underlined by staging the film in flashback, as related by a pair of toothless old codgers (Clem Bevans and Houseley Stevenson). ~ Hal Erickson, Rovi

Clem Bevans
as Hawley as an Old Timer

Russell Simpson
as Bartender as an Old Timer

Chalky Williams
as Man in Saloon

Paul Palmer
as Man in Saloon

Critic Reviews for The Gal Who Took the West

There are no critic reviews yet for The Gal Who Took the West. Keep checking Rotten Tomatoes for updates!

Audience Reviews for The Gal Who Took the West

The Gal Who Took the West I watched this film on Netflix Streaming, a hard copy on DVD, doesn't seem to be on the US market. That's a shame because its not a bad film. I watched this film because it came off a list of Universal International Pictures, I started watching in 1949 time frame. A number of these movies put out by Universal International Pictures are no longer available and that to is a shame. There are many kinds of westerns, Spaghetti Westerns, Cowboy and Indian westerns, Good guy bad guy westerns, and old time serial type westerns, this movie doesn't fit any of those categories. This is listed as a western comedy and I guess it did have a funny part or two, but its just a good story, A opera singer comes into town, she is not your typical opera singer by no mean, not big boned, fat or big busted, no this women is beautiful, and two brothers who can't stand each other start a quarrel over her. Maybe should be a romantic western. 3 stars

The Gal Who Took the West Quotes