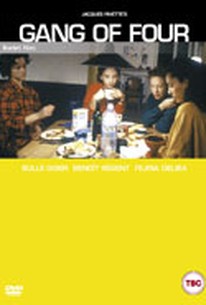 No film critic of 1989 could write an assessment of the French-made Gang of Four (originally La Bande des Quatre) without using the phrase "Pirandellian" at one point or another. The story revolves around the hand-picked acting class of a famed director (Bulle Ogier) who works only with women. The four members of the class (Fejria Deliba, Nathalie Richard, Bernadette Giraud and Ines de Medeiros D'Almeida) are assigned to study the text of the Marivaux play Double Infidelities. Now, it just so happens that the four actresses share an apartment...and as they begin allowing the Marivaux play to influence their offstage lives, they share a lot more than room and board. A winner of the Berlin Film Festival International Critics prize, Gang of Four maintains an acceptable level of suspense and sexual intrigue throughout, though the spell is broken by a confusing climax. ~ Hal Erickson, Rovi

Nathalie Richard
as Cecile
View All

An accessible and entertaining vision of how the New Wave has survived and evolved long after it was declared dead.

More classical and less experimental than [Rivette's] previous features, it's almost a summary and compilation of his major themes and preoccupations -- an ideal introduction to his work.

An intriguing, if somewhat overextended, melodrama that delves into Pirandellian questions of real versus theatrical life, and considers the nature of deception and fate.

This lengthy 155 minute work by Jacques Rivette is both brilliant and frustrating.

Required viewing for those who want roommates :)