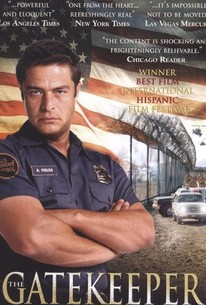 Adam Fields (John Carlos Frey, who also wrote, directed, and produced the film) is a law enforcement agent patrolling the Mexican border outside San Diego. He's harboring two dangerous secrets. His bosses don't know that he belongs to a racist, right wing vigilante group called National Patrol, that harasses and assaults illegals as they try to cross the border. His confederates in the National Patrol don't know that his own mother is Mexican. Adam, who easily passes for Caucasian, doesn't tell anyone about his mother, a former prostitute. Frustrated with the border patrol's efforts to curtail border crossings, Adam and the shock jock leader of National Patrol, Jack Green (J. Patrick McCormack), come up with a scheme to embarrass the border patrol into taking their concerns more seriously. Adam will go undercover as a Mexican and cross the border into the states to show how easy it is, while capturing everything on a hidden video camera. Adam pays to be brought over, but once in the U.S., the scheme goes horribly awry, and Adam winds up stuck with a hapless group of illegals, forced to work for ruthless criminals at a crystal meth lab. Unable to escape, he gets a firsthand look at the hardships the illegal immigrants endure. Frey tried to sell his script for The Gatekeeper to a Hollywood studio, but, unwilling to compromise his vision, eventually decided to finance the film himself. The Gatekeeper was shown at the 2002 Urbanworld Film Festival and at the 2002 Santa Barbara International Film Festival, where it won the Phoenix Award.

Joe Hogan
as FBI Agent No. 1

Robert Roy
as FBI Agent No. 2

Chris Martinez
as Latin Guard No. 2

Del Toro
as Coyote No. 2

Dan Lorenz
as Rancher No. 1

Greg Shilts
as Rancher No. 2

Dale Reese
as Rancher No. 3

Bob Barnard
as Rancher No. 4

Daren Janes
as Rancher No. 5

David LIttleton
as FBI Agent No. 3
View All

Critic Reviews for The Gatekeeper

Despite its flaws, The Gatekeeper will keep you engaged.

The movie never rises above mediocrity and at times, devolves into amateurish histrionics.

Though the film is far from polished, the force of its significance to Mr. Frey, as well as the urgency of its political message, give it some genuine impact.

The truly hellish portrayal of the workers' post-crossing indentured servitude in a meth lab makes up for a sluggish opening act.

This deeply personal work steadily grows more powerful and eloquent, creating a tragic vision of the plight of illegal aliens that transcends its melodramatic elements.

The film would be destined for limited interest even if it had a good script, which it didn't.

While his instincts as a director could use some sharpening, Frey's performance and script, brought to life by a solid supporting cast, are both uncommonly smart.

Suffers from a condition that afflicts most 'message' movies -- heavy-handed preachiness.

This earnest, shoestring indie that makes use of some sharp location shooting and sympathetic performances to rise above its often awkward staging and writing.

A very personal and heartfelt film, if one that shows the strains of its low budget and strident desire to tell an Important Story.

Audience Reviews for The Gatekeeper

There are no featured audience reviews yet. Click the link below to see what others say about The Gatekeeper!