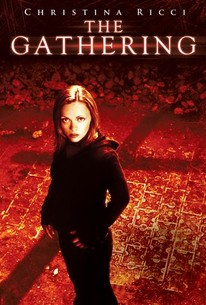 The discovery of a strange religious relic may have something to do with the terrible dreams haunting a young woman in this stylish thriller from Great Britain. When a pit opens up in a small English town, the local priest, Luke Fraser (Simon Russell Beale), is startled to discover what appears to be an ancient church lurking beneath. Fraser asks a friend with a background in archeology, Simon Kirkman (Stephen Dillane), to investigate the ruins, and Kirkman is startled to find a series of striking realistic sculptures and an usual portrait of Jesus in which the savior turns away from the church. As Kirkman and his wife, Marion (Kerry Fox), are driving home from the site, they accidentally hit Cassie Grant (Christina Ricci), an American student who is crossing the street. While Cassie isn't seriously injured physically, she has suffered a blow to the head that's left her with a mild case of amnesia; Marion brings Cassie home to recuperate until her memory returns, and in the meantime, Cassie helps keep an eye on Michael, Simon and Marion's young son. Soon, Cassie begins having a series of vivid and disturbing dreams involving the people of the town suffering violent deaths. Kirkman and Fraser begin wondering if the church was buried on purpose (and if so, why) and if Cassie's nightmares are somehow connected to the discovery of the house of worship. Completed in 2002, The Gathering didn't see release until 2004, when it opened in France and Germany.

Mark Bagnall
as The Gathering

Clare Bloomer
as The Gathering

MacKenzie Crook
as The Gathering

Richard Evans
as The Gathering

Roy Evans
as The Gathering

Paul Hamilton
as The Gathering

Jason Morell
as The Gathering

Fenella Norman
as The Gathering

Robert Paschall Jr.
as The Gathering

Diana Payan
as The Gathering

Jacqueline Phillips
as The Gathering

Stephen Eugene Walker
as The Gathering

Anatol Yusef
as The Gathering

Jon Croft
as The Vicar

Malcolm Terris
as The Mayor

News & Interviews for The Gathering

View All The Gathering News

Critic Reviews for The Gathering

It's a dreadfully empty-headed snooze of a thriller.

Well, spend a few quality minutes with The Gathering and you'll see, in short order, just how bad one of these canned atrocities can be.

As a longtime fan of both horror flicks and Christina Ricci, I was willing to overlook The Gathering's five-year delay and actively look for some buried treasure in this flick. Alas, I found none.

Audience Reviews for The Gathering

[img]http://images.rottentomatoes.com/images/user/icons/icon14.gif[/img] It's silly plot and tagline suggested something pretty damn stupid. Whilst watching it my expectations were justified. Overall, it's a barely passable horror flick that suffers hugely from its cliche's, sometimes wooden acting, and cringe worthy script. However Christina Ricci's performance is likable and engaging, she makes the film bareable despite it's faults. The Gathering is enormously predictable, but the dream sequences are cool and filmed brilliantly, and the set pieces are structured to a decent enough quality. The story is also very peculiar and interesting and deals with morals. The result of (some) of the talent could have been a lot better, but for a narratively ridiculous biblical thriller, it's not that bad.

Christine Ricci is alike her co-star Kim Basinger's role in Bless the Child to assist and protect an innocent child in this supernatural thriller. It has more in common with the Hilary Swank film The Reaping than The Da Vinci Code or The Omen.

gosh this was boring