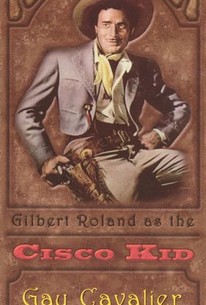 There'd already been a "Cisco Kid" B-picture titled The Gay Caballero, so this Monogram "Cisco" entry was released as The Gay Cavalier. No matter: it means the same thing, and the film is the mixture as before. Gilbert Roland stars as Cisco, while Martin Garralaga, usually cast as Pancho, is here seen as a wealthy ranch owner. With his usually roguish aplomb, Cisco saves Garralaga from a gang of thieves, engaging chief villain Tris Coffin in an exciting bit of climactic swordplay. Gay Cavalier represented Gilbert Roland's first "Cisco Kid" endeavor; he would appear in five more before being replaced by Duncan Renaldo in 1947.

Gilbert Roland
as The Cisco Kid

Critic Reviews for The Gay Cavalier

There are no critic reviews yet for The Gay Cavalier. Keep checking Rotten Tomatoes for updates!

There are no featured reviews for The Gay Cavalier at this time.