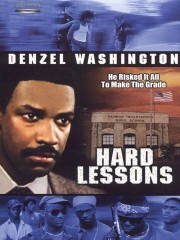 Desmond A
October 10, 2016
Great film seen it back in high school and still think it's a good movie

Jonathan C
½ May 9, 2016
A generic "tough principal turns around a failing and tumultuous high school" movie shows us an early glimpse of the great Denzel Washington.

Johnny R
September 6, 2014
Amazing film!! It was engaging and intense!! The film showed how one man will do anything to make a situation better!! The scenes about making everything better was engaging!! This was Denzel Washington's last TV movie and he did not disappoint!! He was terrific as the main protagonist!!

George McKenna is a first time principle that has been assigned to George Washington high school in the Los Angeles ghetto. The students are out of control, the teachers are below par, and the inmates run the asylum. McKenna comes in with his ideals but quickly learns change takes patience and he needs to impact one student at a time until they all buy in.

Eric Laneuville, director of The Client List, Naughty or Nice, LA Confidential, Bad Girls, Secret Whiteness, The Knife and Gun Club, and Bad Girls, delivers Hard Lessons. The storyline for this picture is fairly straightforward and on par with most films in this genre (Lean on Me). The acting is pretty good and the cast includes Denzel Washington, Lynn Whitfield, Earl Billings, Akosua Busia, and Gregg Dandridge.

We actually had a visitor over I knew was a huge Denzel Washington fan so I had this on for her when she came over. We watched it and found it fairly predictable and straightforward. It was fun watching Denzel try to prove he could be the lead character in a film (this was one of his first ever lead performances). I would say this was about average and as you'd expect from the genre. I wouldn't go out of my way to see this but Denzel was solid in this film.

"What's your problem, they're not following fast enough?"

Jonathan P
½ June 13, 2011
Not nearly as good as other entries in this genre, but Denzel does a good job for such an early role. Though made for tv Hard Lessons is quite real in the use actual gang activity. The ending came quite abruptly and didn't really tie up all the loose ends. Not a bad movie by any means but Stand and Deliver still reigns as the best in the teacher/principal inspirational story genre.

July 25, 2010
I SAW THIS MOVIE IN HIGH SCHOOL AND I WOULD LIKE SEE IT AGAIN, THIS MOVIE WAS BASED ON THE HISTORY OF THE HIGH SCHOOL I ATTENDED AND HOW PRINCIPAL MCKENNA TURNED IT INTO A PREP SCHOOL. GEORGE WASHINGTON PREP HIGH IN SOUTH CENTRAL LA

Tiffany S
½ September 23, 2008
I found this movie by looking up Denzel Washington on Netflix and found out the movie was about my high school and the principal that was there that changed it around...this was before I was there of course, because when the movie came out I was only in the 3rd grade, lol!
Page 1 of 1