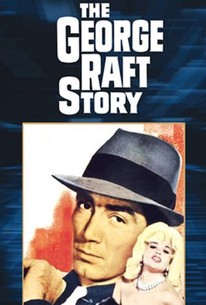 This is an interesting biography of the actor known for his gangster roles in films, and though Ray Danton plays the part of George Raft without looking like him in the least, he is still convincing in his mannerisms. Without getting into any in-depth plumbing of the actor's life, the story begins with the young Raft making his way in New York as a dancer and rubbing shoulders with underworld figures. Then he goes to Hollywood where he eventually finds fame in the film Scarface and gets typecast as a gangster. Tiring of this persona but unable to do very much about it, Raft's career starts to decline for quite a awhile before his success in Some Like It Hot. Along the way, his relationships with five different women are pictured in the briefest fashion. ~ Eleanor Mannikka, Rovi

Murvyn Vye
as Johnny
View All

Delightful biopic is full of zippy dance numbers, with lively look at life of actor-dancer.

There are no featured audience reviews yet. Click the link below to see what others say about The George Raft Story!