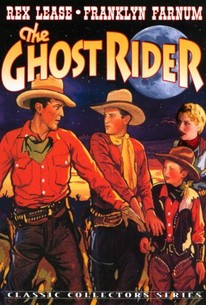 Although billed fourth, Veteran silent screen actor Franklyn Farnum is the real star of this ultra low-budget Western from the poorly named Superior Talking Pictures. Escaping from jail, Jim Bullard (Farnum) avenges himself on the thieving Raskobb clan by placing an ace of spade on every member he can kill. Enter the newly appointed deputy sheriff, Dave Danford (Rex Lease), who quickly finds himself in the crossfire between the warring Bullards and Raskobbs. The Ghost Rider and a subsequent Superior release, Cyclone of the Saddle (1935), were tagged as "Rough Rider" Westerns. Rex Lease and teenage rider Bobby Nelson co-starred in both.

News & Interviews for The Ghost Rider

View All The Ghost Rider News

Critic Reviews for The Ghost Rider

Audience Reviews for The Ghost Rider

There are no featured audience reviews yet. Click the link below to see what others say about The Ghost Rider!