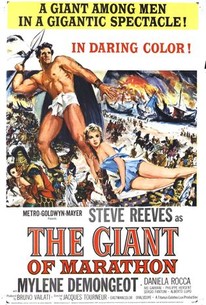 The Giant of Marathon Photos

Rather than telling a dramatized version of the exploits of the Greek runner Phidippides (or Philippides, as used here), this standard Italian costume drama has the great athlete almost single-handedly defeating the Persians. Set in 490 B.C. when the Persian armies were ready to finish conquering Greece and head into Europe, Phidippides (Steve Reeves, who else?) rallies the Athenians and they fight a series of spectacular, massive battles. In reality, Phidippides had run 140 miles to Sparta and back to ask for their help before any battles began. The Persians had already landed on the plains of Marathon, 26 miles from Athens but thanks to Phidippides forewarning, they were defeated by advancing Athenian forces. Phidippides' final run from Marathon back to Athens to warn them about a second attack by the Persian forces is not depicted in this drama -- that last run on top of the futile, 280-mile round trip to Sparta, cost him his life.

Gianni Loti
as Teucro
View All

Critic Reviews for The Giant of Marathon

In the division of brainless "spectaculars" this eye-filling melodrama about the days of ancient Greece is an undeniable whopper - and. on the whole, quite good fun if you leave your adult skepticism in the check-room.

... this ridiculous adventure tale comes to a better end than could be expected.

Audience Reviews for The Giant of Marathon

There are no featured audience reviews yet. Click the link below to see what others say about The Giant of Marathon!

The Giant of Marathon Quotes