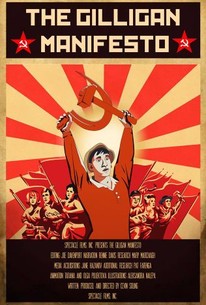 At the height of the Cold War, Gilligan's Island depicted seven Americans living in an analogue of a post-apocalyptic world where the survivors have to rebuild civilization. Remarkably, the society they create is pure communist. Interviews with the show's creator and surviving actors reveal that Gilligan's Island was conceived to celebrate Marxist ideals and lampoon democracy.

Critic Reviews for The Gilligan Manifesto

While its pseudo-academic subject matter might have made for a reasonably amusing short, the documentary wears out its welcome long before reaching its final arguments.

"The Gilligan Manifesto," is conceptually shipwrecked well before completing its one-and-a-half-hour tour.

We spend an awful lot of time watching clips which doubtless have nostalgic value for some viewers and serve well enough to illustrate Soling's points, but basically keep telling us the same thing.

The Gilligan Manifesto never quite feels compelling or insightful enough to exploit its radical revelations to its fullest sensationalism. Unfortunately, Soling's clunky documentary never delves into this colorful notion with tongue-lashing vibrancy

Audience Reviews for The Gilligan Manifesto

There are no featured audience reviews yet. Click the link below to see what others say about The Gilligan Manifesto!