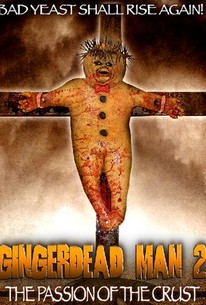 The horror rises like baker's yeast in this sequel to the fully baked frightener about a murderous cookie man with a true taste for terror. After inheriting his father's fledgling film studio, ambitious young producer Kelvin Cheatam announces an outrageous slate of genre films that will have horror hounds drooling and hopefully save the studio from bankruptcy. "Hamburger Time Traveler Detective" and "Space Spankers 2015" are sure to be big hits, but Cheatam's most personal project is "Tiny Terrors 9: Purgatory of the Petite." The "Tiny Terrors" series was his father's most infamous film series, and Cheatam is determined to carry on the twisted family tradition. As production on "Tiny Terrors 9" gets underway, however, a crusty killer shows up on lend an air of authenticity to all of the cinematic slaughter currently unfolding before the cameras.

Pieter Christian Colson
as Assistant Director No. 2
View All

Critic Reviews for Gingerdead Man 2: Passion of the Crust

Mostly forgettable, and clocking in at a little over an hour, it's just lazy.

Audience Reviews for Gingerdead Man 2: Passion of the Crust

I honestly thought the first Gingerdead Man movie had no redeeming value to it. So why would I watch the sequel, well if the studio knew they couldn't make a horror movie on a Gingerbread Man effective. Embrace the idea and turn it into a comedy, but somehow it's even worse than the first. The none horrifying yet poorly cook and terrible looking Gingerdead Man causes murder and (sex) mayhem on the set of a horrible low budget movie set, I think he was trying to prevent this movie from being made. It will take the determination of the studio's dumb young new owner to save both his company and the lives of his new friends. Including a "terminally ill" young boy whose final wish it was to meet the studios stars. I honestly think the story can't get any worse, but the writers keep proving me wrong the longer I watched this. Watching a Gingerbread Man kill people never looked boring and repetitive, which is why the focus is on the human characters which are still boring. The characters are so obnoxious and unlikable you actually look forward to watching them die. There's a lot of over the top moments I witness in this movie, including a robot disintegrating a man being used by the Gingerdead Man. Also, why in the world would you give away how the villain dies on the cover art. You don't do that, that's like giving away the ending to The Sixth Sense on the cover. The Gingerdead Man: Passion of the Crust is an unholy disaster of a movie that belongs in the 7 circles of Hell. The Gingerdead Man is without a doubt the worst horror franchise ever.

The Gingerdead man is back in this sequel to the first movie this time he has been shipped to a movie studio inside a box of other cookies and he is lookin for a new body but first he must kill off 6 people to get there. This movie falls under the so bad its good but you have to be a true fan of some of the Full Moon Pictures to get the in jokes i still found it a fun watch as long as no one ever thinks to take this movie serious.

While gorier than the first the sequel is really nothing more than a long in-joke that pokes fun at both Charles Band and Full Moon movies in general as well as gives the company's detractors a playful slap in the face. Unless you've grown up on Band and his Empire/Full Moon/Wizard films you won't find too much of interest here.