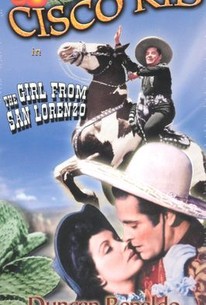 In their last feature film, the Cisco Kid (Duncan renaldo) and Pancho (Leo Carrillo) come up against a vicious gang who is robbing stagecoaches in their likenesses. But when the latest holdup injures driver Jerry Todd (Bill Lester), the real Cisco and Pancho make sure that the youngster gets medical treatment, much to the surprise and gratitude of his intended, Nora Malloy (Jane Adams), who agrees to help set a trap for the real culprits. Filmed at Pioneertown, a popular movie location just east of Los Angeles, The Girl From San Lorenzo was the last of producer Philip N. Krasne's Cisco Kid feature films for United Artists. It was followed by the 1950-1956 television series, again produced by Krasne and starring Renaldo and Carrillo.

Duncan Renaldo
as The Cisco Kid

Wesley Hudman
as Rusty
View All

Critic Reviews for The Girl from San Lorenzo

There are no critic reviews yet for The Girl from San Lorenzo. Keep checking Rotten Tomatoes for updates!

There are no featured reviews for The Girl from San Lorenzo at this time.

The Girl from San Lorenzo Quotes