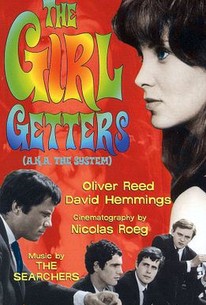 The System is a "Swinging London" comedy with an unsettling undercurrent of bitterness and cynicism. Oliver Reed plays a girlie-magazine photographer, the self-appointed leader of a group of handsome but unscrupulous bachelors who hang out in a British seaside resort. Their avowed goal is to seduce and abandon as many wealthy young girls as possible. One of the group, jealous of Reed's success, uses their "system" to hoist the leader on his own petard. Michael Winner solidified his reputation as a "mod" director in The System--and also displayed his utter contempt for the pretty young people he depicts. The film was released to the US under the more bankable title The Girl Getters. ~ Hal Erickson, Rovi

Critic Reviews for The Girl-Getters

There are no critic reviews yet for The Girl-Getters. Keep checking Rotten Tomatoes for updates!

There are no featured reviews for The Girl-Getters at this time.