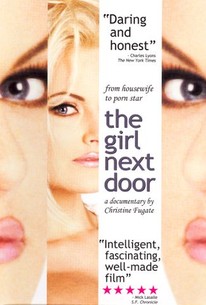 The Girl Next Door Photos

Critic Reviews for The Girl Next Door

As a behind-the-scenes life of the sex industry, you get the same fascinating bird's-eye view that Paul Thomas Anderson gave you in Boogie Nights.

A day in the life of Stacy Valentine will take you to the movie set for a DP (double penetration), to the tanning salon, the plastic surgeon for numerous unncessary improvements, and the hypnotherapist.

The conclusions that cannot be drawn from The Girl Next Door are as thought-provoking as the ones that can--and perhaps more so.

Intriguing if awkwardly stitched together... Girl doesn't... seem comfortable posing difficult questions but it does offer plenty to shake your head at.

A playful, powerful, and very honest portrait of a profession we don't see all that often.

The most shocking part of the documentary is how Stacy really does seem like the innocent girl next door.

Audience Reviews for The Girl Next Door

The Girl Next Door Quotes