The Girl with the Dragon Tattoo2011 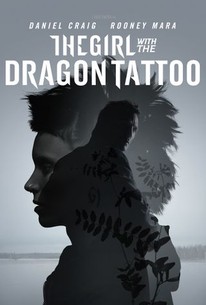 Critics Consensus: Brutal yet captivating, The Girl With the Dragon Tattoo is the result of David Fincher working at his lurid best with total role commitment from star Rooney Mara.

Critics Consensus: Brutal yet captivating, The Girl With the Dragon Tattoo is the result of David Fincher working at his lurid best with total role commitment from star Rooney Mara.

Critic Consensus: Brutal yet captivating, The Girl With the Dragon Tattoo is the result of David Fincher working at his lurid best with total role commitment from star Rooney Mara.

The Girl with the Dragon Tattoo Videos

The Girl with the Dragon Tattoo Photos

The Girl with the Dragon Tattoo is the first film in Columbia Pictures' three-picture adaptation of Stieg Larsson's literary blockbuster The Millennium Trilogy. Directed by David Fincher and starring Daniel Craig and Rooney Mara, the film is based on the first novel in the trilogy, which altogether have sold 50 million copies in 46 countries and become a worldwide phenomenon. -- (C) Sony

Karl Josephson
as Tech at MacJesus

Martina Lotun
as Reporter at Vanger

News & Interviews for The Girl with the Dragon Tattoo

View All The Girl with the Dragon Tattoo News

Critic Reviews for The Girl with the Dragon Tattoo

The result is more cohesive, and of course longer, though dedicated fans will be annoyed by departures from the books for the sake of brevity.

overall the movie does take allegiances with both the book and original movie, but it comes into its own to unravel a truly alluring story.

Was it really worth the effort? For all Fincher's famously fanatical control, he can't dispel the stench of half-baked cheese that hangs over the source material.

I could not take my eyes off the film and never once wanted to exit the theatre, all of which are attributes I don't want to diminish or dispute in any way whatsoever.

This is a finely honed genre thriller, but it also continues Fincher's preoccupation with the persistence of age-old urges in the modern world.

The 2.5-hour runtime flies by, but you won't even notice because Mara's outstanding performance is simply that mesmerizing.

A cold, captivating rape revenge thriller that is more measured than its Swedish counterpart. Anchored by a stunning performance by Mara, the plot is as convoluted as its source material, but Fincher makes this eminently watchable.

The second time we see that scene, through the footage Lisbeth recorded it's taken on the characteristic of her perspective and we are revolted...

For this particular story, Fincher's style is just too sleek.

David Fincher's 2011 adaptation of THE GIRL WITH THE DRAGON TATTOO is both a quite good movie and a deeply frustrating one.

Audience Reviews for The Girl with the Dragon Tattoo

This American adaptation of Larsson's best-seller is just as intriguing as the Swedish version but Fincher manages to create much more tension and maintain a more fluid pace - and it has a magnificent performance by Rooney Mara, who is definitely the star here.

Only David Fincher could make a 'style over substance' thriller this impressive.

Really enjoyed this movie. And it can be watched more than once. You almost need to take notes at the beginning of the movie though.

A disgraced journalist and a young researcher who has been the victim of serial abuse throughout her life join forces to discover the fate of a girl who disappeared from a small Swedish town 40 years earlier. I was nowhere near as enamoured with the Swedish original as many others seemed to be, but this big budget American reinvention achieves something very rare; a Hollywood remake that is better than the original. Daniel Craig is a much more charismatic protagonist, Rooney Mara's Lisbeth seems like much less of a caricature and the supporting cast that includes Christopher Plummer and Stellan Skarsgard provides much more dramatic depth. But it is Fincher's dark, brooding visuals that give the necessary texture and the result is a film that feels more adult and less sensationalist than the Swedish version. Like The Departed and Insomnia before it, TGWTDT is proof that a Hollywood remake CAN work in the right hands if the bigger budget is spent on talent rather than superfluous special effects.

The Girl with the Dragon Tattoo Quotes