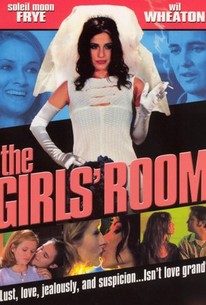 Irene Turner makes her directorial debut with this comedy-drama about goth chicks and Southern belles. College roommates Casey (none other than Soleil Moon Frye of Punky Brewster fame) and Grace (Cat Taber) are a chalk-and-cheese couple if there ever was one: the former favors sex, drugs, and all things leather while the latter is a prim and preppie straight-A student who is engaged to her frat boy beau (Wil Wheaton). Yet when Casey's teasing threatens her future wedding, Grace vows vengeance. She begins hanging out with her roommate's friend Joey (Gary Wolf), a pensive loner and one of the few guys on campus that Casey has yet to have sex with. Soon, a vicious cycle of jealousy and suspicion develops that threatens to ruin the lives of both women.

Chris Martin
as Frank
View All

Critic Reviews for The Girls' Room

There are no critic reviews yet for The Girls' Room. Keep checking Rotten Tomatoes for updates!

Audience Reviews for The Girls' Room

There are no featured audience reviews yet. Click the link below to see what others say about The Girls' Room!