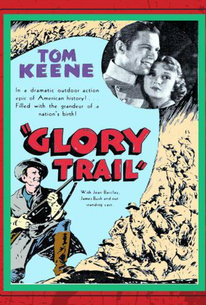 There are those western fans who feel that cowboy star Tom Keene did better work at low-budget Crescent Pictures than he ever had at mighty RKO Radio. Set in the years following the Civil War, Glory Trail casts Keene as John Morgan, a former Confederate captain presently employed to protect railroad workers from Indian attacks. John is in love with Lucy Strong (Joan Barclay), but her father (E. H. Calvert), a Yankee colonel, hates "Johnny Rebs" with a passion. Suffice to say that John proves himself a worthy son-in-law through a series of conspicuous acts of bravery. The villainy is provided by bull-necked Walter Long, former D. W. Griffith player and comic foil for Laurel & Hardy.

Harve Foster
as Hampton
View All

Critic Reviews for The Glory Trail

There are no critic reviews yet for The Glory Trail. Keep checking Rotten Tomatoes for updates!

There are no featured reviews for The Glory Trail at this time.