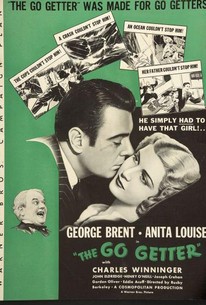 An intrepid amputee must pass a test to prove his devotion to his sweetie in this romantic drama. The hero lost his leg during the crash of a navy dirigible. Later he gets a job with a lumber company. He soon falls for the boss's daughter. Unfortunately, the general manager is also interested in her and so requires that the young man pass the notorious "blue vase test" in hopes of stumping the lovesick lad. The test involves retrieving a sketchily described vase and bringing it to headquarters on the railway. The plucky lad succeeds, marries his gal, and becomes the new general manager to boot.

Ann Doran
as Maizie the Maid

George Humbert
as Tony
View All

Critic Reviews for The Go Getter

Cappy Ricks story, idealizing servility under the guise of stickto-itiveness.

Charles Winninger's energetic performance as Cappy keeps things moving, and George Brent seems to be mildly in character most of the time; at any rate he never makes the mistake of limping on the wrong leg.

There are no featured reviews for The Go Getter at this time.