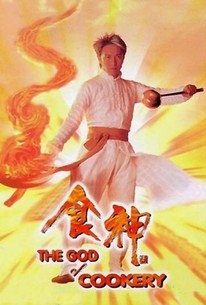 This Hong Kong action-comedy stars popular comic Stephen Chiau as a sneaky and greedy chef who routinely rigs cooking contests to his advantage and then makes a bundle by franchising his cuisine until one day he is badly beaten by a former apprentice. Forced to leave the island in disgrace, the chef ends up in a Shaolin temple that masks a secret cooking school. After boning up on his culinary techniques, the cook is ready for a hilarious rematch.

Critic Reviews for The God of Cookery

While it lacks the focus and polish of his more recent (and wildly popular) Shaolin Soccer, it is a mostly funny piece that only occasionally overstays its welcome

Audience Reviews for The God of Cookery

It's really a running joke by now about how I have enjoyed every Stephen Chow movie much more than Kung Fu Hustle, which many people consider his best film. I even liked his cutesy alien kid's movie, CJ7, more than Kung Fu Hustle. I seriously may be the only person on this earth that can claim that. And, of course, I am definitely prone to hyperbole. Personally speak, for my taste, his best film has been Journey to the West. It had all the silliness you would expect out of one of his films, but it also had a surprising amount of heart and depth. I understand why people liked Kung Fu Hustle, and why they think it's his best film, but I just do not see it. To be fair, however, I've been meaning to watch Hustle again just to see if I can view it in a different light than I had previously. With that out of the way, I did think that this was a better film than King of Comedy, the last film I reviewed. King of Comedy's problem was its lack of tonal consistency. While this film does have dramatic elements, they're more in tune with what the film's story is about as opposed to King of Comedy's dramatic elements. One of my favorite things about Stephen Chow the writer/director is the fact that he's totally willing to do completely different things with each film. Say what you will about Kung Fu Hustle, but there's no denying that it's unlike any kung fu movie that came before it or since. And that describes a lot of his filmography, he just hasn't stuck to one type of film his entire career, like a Jackie Chan has done, for example. And that's not meant as a knock on Jackie. He does what he does best, but Chow is more than willing to look outside the box for new ideas in order to tell a story he might think is interesting. This is completely different from any of his other movies as it tells the story of an arrogant chef, Chow himself, who falls from grace after being revealed to be a fraud. After this fall, he humbles himself and makes some new friends who help him along the way to his 'redemption' to try and regain the title of God of Cookery. Of course, his own pride and arrogance get in the way once again, as he's only set on avenging the people who humiliated him rather than doing so out of the spirit of 'competition.' So the narrative, at least how it's structured, is definitely a solid one of a character making a real change in his outlook and attitude. It's also a funny film, particularly the climactic final cooking scene, which is literally out of this fucking world. While I wouldn't call it a consistently hilarious film, the final cooking scene is absolute insanity. It's, honestly, some of Chow's most inspired comedic moments. It's honestly the reason the film gets 3.5 stars. It wasn't for the pure insanity that is this final competition, it would've gotten 3 stars. The film is always fun, but they took up a notch during the climax. Trust me when I say it's fucking insane. There's also, as in the King of Comedy, the requisite romantic subplot. Though this one is a little more mean-spirited and sexist. After being exposed as a fraud, he becomes friends with this woman who has a small food kiosk on the street. This woman, with a scar above her eye and messed up teeth, absolutely worshiped Chow's character when he was the God of Cookery, that's how she got the scar above her eye. Let's just say she's not exactly the most attractive of women, since that is how she was presented. So there's this moment when this woman tries to 'flirt' with Chow's character and he's like grossed out by her, to the point that he literally grabs the next taxi and leaves to go to mainland China for the final competition. She goes after him the next day and when he sees her he runs in the opposite direction, in disgust, in an, admittedly, really funny chase sequence. Look, I realize this was 20 years ago, but this was a pretty ugly portrayal of the only female character of importance in the film. Thing is, she was actually the coolest character in the entire film. Tougher than all of the men combined, yet she's reduced to the ugly friend type in this film. That is, of course, until at the end when she undergoes a makeover and Chow's character finally notices her as a woman for the first time. Seriously. Such an antiquated trope. Essentially, in this universe, to Chow's character, if you're not an attractive woman then you are not worthy of love and are only really worthy of disgust. That's really sad, honestly, considering how highly I think of Chow and his talents as a writer/director. With that said, this is a good film for the first 70 minutes, the last 20 minutes are pretty incredible and they more than elevate this film past its original state. The sexism is a little ugly and antiquated, even for the mid-90s, but such is the way these things are sometimes. Still, I'd very easily recommend this film. It's just a lot of fun to watch and it's worth the price of admission alone, you won't pay a cent if you've got Netflix, just to see the insanity in the climactic act of the film. It's that good. Really good movie here.

What Stephen Chow got up to before the rest of the world discovered him. Chow directs and stars as The God of Cookery, exposed as a fraud, who then has to claw his way back from the bottom. Very very silly, stupid even, with heart. This is how iron chef should be done.

The God of Cookery Quotes