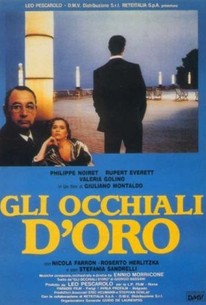 In this tragic romance set in Ferrara, Italy in 1938, and at a nearby seaside resort, a wealthy Jewish boy is thwarted in marrying the girl he loves when Mussolini's race laws (enacted to cement the regime's growing alliance with Germany) take effect. Rather than suffer as a Jewess, his intended converts to Catholicism and marries a young fascist. Meanwhile, the town doctor, who is a homosexual, becomes increasingly outcast when he openly falls in love with a boxer. The boxer at first is the man's lover, but when he decides to beat and rob the doctor, no one comes to his aid, and later he commits suicide. This movie is part of a trilogy about prewar Ferrara by director Giuliano Montaldo.

Critic Reviews for The Gold-Rimmed Glasses

There are no critic reviews yet for The Gold-Rimmed Glasses. Keep checking Rotten Tomatoes for updates!

There are no featured reviews for The Gold-Rimmed Glasses at this time.