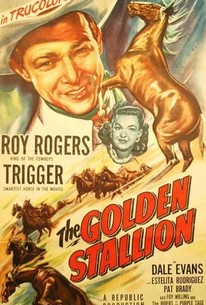 Part of the Roy Rogers series, this film focuses on Roy Roger's horse, Trigger, and his infatuation with a handsome palomino mare. When Trigger discovers the mare being beaten by her lowlife owner, he kills him, leaving Rogers to take the blame. However, it seems that Trigger's new girlfriend might be unwittingly involved in some underhanded activity.

The Riders of the Purple Sage

Critic Reviews for The Golden Stallion

There are no featured reviews for The Golden Stallion at this time.