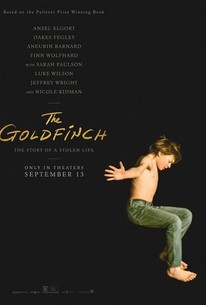 "The Goldfinch" is the film adaptation of Donna Tartt's globally acclaimed bestseller of the same name, which won the 2014 Pulitzer Prize for Fiction and spent more than 30 weeks on The New York Times Best Sellers list. Theodore "Theo" Decker (Ansel Elgort) was 13 years old when his mother was killed in a bombing at the Metropolitan Museum of Art. The tragedy changes the course of his life, sending him on a stirring odyssey of grief and guilt, reinvention and redemption, and even love. Through it all, he holds on to one tangible piece of hope from that terrible day...a painting of a tiny bird chained to its perch. The Goldfinch.

News & Interviews for The Goldfinch

View All The Goldfinch News

Critic Reviews for The Goldfinch

A flat and lumbering albeit beautifully filmed drama that bores more than it entertains.

It's all poeticism without a sense of humanity, since the characters themselves aren't written as people, but as broad statements.

Whether or not you've read the book, the film of The Goldfinch is definitely worth a look; it's no masterpiece but it's a whole heap better than many of the studio-made American films released so far this year.

I sat there, watching and thinking, "there are so many good things in this, yet none of them are touching me in the slightest." I was bored, and that's almost the most damning thing. Considerably less than the sum of its parts.

There is no sense of pace or mystery, but rather an evident need to get through Tartt's dense plotting in the two-and-a-half-hour run time.

It's well-crafted, but there's absolutely no emotional connection.

Donna Tartt's Pulitzer Prize-winning novel touched millions. Now, in Hollywood's hands, the story of a broken young boy coming to terms with the death of his mother is painfully one note, and sort of pointless.

...a deliberate and somewhat erratic drama that ultimately fares better than one might've anticipated...

...a meticulous, beautifully mounted adaptation that deserves an audience

While perhaps not the surefire Oscar bet that might be expected of an adaptation of a Pulitzer Prize winner, The Goldfinch is nevertheless an enthralling story filled with fascinating characters and great performances.

This is one of the many muddy and unhelpful responses to the events of 9/11 and what has come after them, along with other events in the new century.

There are no featured reviews for The Goldfinch at this time.