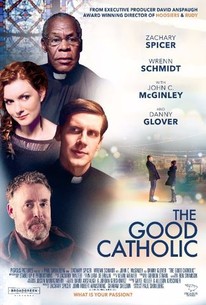 Daniel (Zachary Spicer) is a young, idealistic priest who loves his work more than anything. While he struggles to find balance between the dueling philosophies of his mentors, Father Victor (Danny Glover), an old school, no nonsense traditionalist, and Father Ollie (John C. McGinley), a chain-smoking, carb-addicted Franciscan, Daniel's passion for his calling never waivers. And then he meets Jane. After a chance encounter during a late night confession, the complicated and mysterious Jane (Wrenn Schmidt), starts to open up Daniel's world to an entirely different set of possibilities. And problems. As new bonds form and old ones are tested, Daniel must decide what his true calling really is--and whether or not he has the courage to answer it.

Critic Reviews for The Good Catholic

A reviewer should never assess a movie for what it is not, but this viewer was not sure for a long time what exactly "The Good Catholic" was.

What's annoying in this otherwise well-meaning movie is how the barbs become a kind of armor against real feeling, and the bland direction offers nothing.

Despite The Good Catholic's interesting macro approach compared to other films of its ilk, it's far less successful on a micro level.

It's a small film in every way, but I found it riveting.

A man of the cloth facing a crisis of faith, particularly one provoked by an attractive woman, covers some well-trod dramatic territory and the director doesn't do much to update this borderline biblical scenario.

The Good Catholic isn't a bad movie but it's not a great one either. Its attempts at being hip are about as edgy as Ned Flanders ordering a white wine spritzer.

A fairly saccharine, well meaning exploration of genuine issues of love and faith.

The story is very plain and without any type of audiovisual discourse and feels more like a telefilm. [Full Review in Spanish]

Thankfully there's a somewhat compelling story here for you.

... deliberately paced drama that likely won't generate much interest beyond the faithful.

Audience Reviews for The Good Catholic

There are no featured audience reviews yet. Click the link below to see what others say about The Good Catholic!