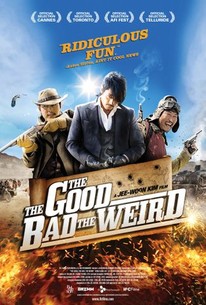 Critics Consensus: Whilst never taking itself too seriously, this riotous and rollicking Sergio Leone-inspired Korean Western is serious fun.

Critics Consensus: Whilst never taking itself too seriously, this riotous and rollicking Sergio Leone-inspired Korean Western is serious fun.

Critic Consensus: Whilst never taking itself too seriously, this riotous and rollicking Sergio Leone-inspired Korean Western is serious fun.

As the Korean peninsula falls into the hands of Japanese imperialists and countless Koreans seek refuge in the vast wilderness of Manchuria, a determined thief, a cold-blooded hitman, and a mysterious bounty hunter all vie for an elusive map that could lead them to a buried treasure from the Qing Dynasty. Tae-gu is "The Weird," a thief who comes into possession of the sought-after map while boldly robbing a train of Japanese military officers. But at the very same time Tae-gu attacks the train, relentless assassin Chang-yi and his violent gang of bandits beset the locomotive as well. Chang-yi is "The Bad," and he'll kill anyone who tries to come between him and the untold treasures of the Qing Dynasty. Just as the cloud of gunpowder begins to clear, a shadowy stranger suddenly appears and rescues Tae-gu from certain death. That stranger is Do-won, "The Good." Do-won has been chasing Tae-gu in hopes that he can capture him and collect the reward money. Now, as these three resolute strangers converge in a sprawling landscape that none of them can truly call home, they quickly discover that Korean resistance fighters, resilient mountain bandits, and the Japanese army also covet the prized map. The fight on the train is only the beginning, too, because when the stakes are this high the action is bound to get bloody.

Lee Byung-hun
as Chang-Yi ("The Bad")

Lee Chung-Ah
as Song-Yi
View All

Imagine the sparseness of classic oaters matched with the energy of martial arts movies and you've got what Kim Jee-won has wrought.

You don't feel the mad passion of Sergio Leone behind it, but a steadily spreading grin that never stops growing

With a nod and a wink to Sergio Leone, South Korean filmmaker Kim Jee-woon delivers a slam-bang western set in Manchuria after the Japanese invasion in 1931.

If you're going to attempt an ambitious action epic, you'd better have the directorial chops to pull it off. Kim clearly doesn't.

Hollywood will try to sell you all summer long on their latest blockbuster being the thrill ride to beat this season. It will be a movie miracle if any of them are as straight-up entertaining as The Good, the Bad, the Weird.

Unfortunately, the glorious excesses that make The Good, the Bad, the Weird, so good and weird, also have a deadening effect.

It isn't the film's style-over-substance approach that prevents it from being as engaging and entertaining as it desires; it's the lack of cohesiveness and discernible rhythm.

The most amazing silliness I've seen in ages.

... a madcap chase for a treasure map filled with double crosses, crazy escapes and lots of black humor.

This film was a total blast from start to finish! It's more than Good, has little that is Bad, and is filled with the Weird.

This Sergio Leone-inspired Korean Western is well directed, funny and thoroughly entertaining especially for fans of Spaghetti Westerns, pretty much like Tarantino's well-known pastiches, but it is also overlong and doesn't seem to know how to end.

A petty thief stumbles upon a map whilst robbing a train and sets off to retrieve the treasure with a cold blooded assassin, a bounty hunter, a gang of outlaws and the Japanese army in pursuit. The Good The Bad The Weird despite its title has little in common with Leone's film. It's far more of an out and out action film, spending little time bothering to flesh out the back story of the characters and the plot is really just a long chase punctuated by over the top shoot outs. What it is, is a lot of fun; the charismatic leads are always engaging to watch and the lighthearted blend of comedy and action has far more in common with the likes of Indiana Jones than The Man With No Name. I personally would have liked to have seen more of "the good", the laconic bounty hunter was for me the most interesting character, but also the one we learn the least about. It has a couple of nice twists and the ending can be seen as a comment on how in the modern age, wealth has become an abstract that has been taken from the grasp of the individual. I'd recommend watching the alternate ending if its available, which contains a couple of extra scenes that made it a lot more satisfying (quite why they were removed in the first place, I have no idea) and seeing it pushed my score up half a star.

A dazzling two-hour smashup of pure non-stop enjoyment that you cannot get enough of. A ridiculously entertaining and wildly enjoyable movie. A pure and utterly fun action movie that's bold, very funny and inventive. A great tribute to The Good, The Bad and The Ugly. A slam-bang classic that is just a wonderful blast to watch. Director, Kim Ji-woon crafts a stunning, visually impressive and stylish western. It's filled with gun-slinging action, sizzling suspense, wild antics, great locations and terrific characters. It's beautifully filmed and refreshingly entertaining. An absolutely brilliant and tremendously thrilling piece of action movie magic. It's always fresh, energetic and never boring. The cast is a real blast. They all look like they are having fun with their roles. Song Kang-ho is outrageous. Byung-hun Lee is excellent. Woo-sung Jung is terrific. I really loved this movie, it's not what you expect and dose not end the way you think it will but its exactly what you will want to see.

A spaghetti western with Koreans?!?!? Hey, it works! Frenetic action, marvelous set-pieces coupled with quirky humor, and some of the most creative camerawork to grace an action movie makes "The Good, the Bad, and the Weird" an absolute marvel to watch. When the action dies down, the movie continues to offer a surprisingly entertaining, albeit simplistic narrative that involves all its characters to be singularly focused on one goal: the map. It works but it simply isn't as memorable as it should be -- especially the last action set-piece; it was surprisingly boring with really sloppy action compared to the rest of the spectacular ensemble set-pieces. When all's said and done, "The Good, the Bad, and the Weird" may have some stand-out camera-workings paired with some inventive and adrenaline-pumping in-your-face action, but it hardly manages to be a memorable movie.