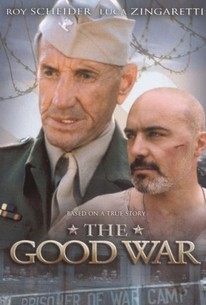 Giorgio Serafini's World-War II prisoner-of-war drama The Good War stars Roy Scheider as an American colonel at a detention camp for Italian soldiers. Scheider's character butts heads with detainee Luca Zingaretti. Their relationship takes an unusual turn when the camp closes at the end of the war and the two men are left behind together.

Critic Reviews for The Good War

There are no critic reviews yet for The Good War. Keep checking Rotten Tomatoes for updates!

There are no featured reviews for The Good War at this time.