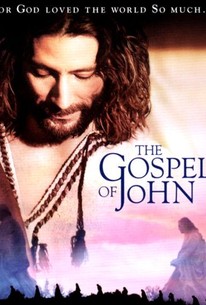 Critics Consensus: The Gospel of John takes a reverent approach to its story without ever bringing it to life, proving that cribbing from the Good Book isn't enough to guarantee a good movie.

Critics Consensus: The Gospel of John takes a reverent approach to its story without ever bringing it to life, proving that cribbing from the Good Book isn't enough to guarantee a good movie.

Critic Consensus: The Gospel of John takes a reverent approach to its story without ever bringing it to life, proving that cribbing from the Good Book isn't enough to guarantee a good movie.

The Gospel of John Photos

Veteran British filmmaker Philip Saville directs the religious epic The Gospel of John, a production of the Canadian company Visual Bible International. This three-hour drama attempts to accurately follow the Gospel According to John, written sometime during the first century. The gospel contains four segments: an introduction to the nature of Jesus Christ; testimony by disciples and the presence of miracles; the Last Supper and crucifixion; and the appearance of the risen Christ. Henry Ian Cusick plays Jesus and Christopher Plummer provides voice-over narration. The Gospel of John was shown in a special presentation at the 2003 Toronto Film Festival.

John Handy
as John the Baptist

Scott Handy
as John the Baptist

Andy Velasquez
as Thomas the Twin

Critic Reviews for The Gospel of John

It's a straightforward, unimaginative narrative, and thus not very memorable.

The sad truth is that director Philip Saville and writer John Goldsmith have made a picture book rather than a film, one that leans so heavily on Christopher Plummer's placid voice-over narration as to be cinematically inert.

Events unfold as chronological vignettes, and there's little room for screenwriter John Goldsmith to reimagine scenes to mine their full dramatic potential.

Turns out to be surprisingly robust.

I found this Gospel long, dull and, for the most part, acted without apparent inspiration.

Although it might test the patience of the non-believer, for those who take their Christianity seriously, this probably is worth seeing.

The "Word made flesh" has now become the Word made visible. In an age of visuals, it might just attract many who would never take the time to read John's gospel.

A slugglishly painful, uninteresting film that might be of value to New Testament students who don't like to read words unless they come with pictures.

Whatever this is, it sure isn't cinema. There's no adaptation, no reconfiguration of the material from one medium to another.

Henry Ian Cusick creates a persuasive Jesus, a savior as happy as often as he is solemn.

Audience Reviews for The Gospel of John

This is the most beautiful film about Jesus that i´ve seen.

The Gospel of John Quotes