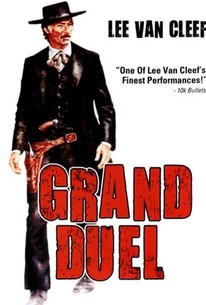 Il Grande Duello is the original title of this Italian/French/West German production. The titular duel pits hard-bitten gunslinger Clayton (Lee Van Cleef) against the equally gritty Saxon (Horst Frank). Before this takes place, however, Clayton champions the cause of Newland (Peter O'Brien) a young punk who'd been framed on a murder charge. One of the beauties of the spaghetti western genre is that there were seldom any clearly defined Good or Bad Guys. This helped to keep the audience guessing as to the ultimate outcome of the film, thereby increasing the entertainment value tenfold.

While die hard fans of this era and this genre might find much to appreciate, The Grand Duel still plays like B-side filler compared to the (now) greats it borrows from heavily.

At times feeling like an opera, it's a Western which harks back to the greats of the proceeding two decades.

The pacing is fine, and the action is clean.

There are no featured audience reviews yet. Click the link below to see what others say about The Grand Duel (Il Grande duello)!