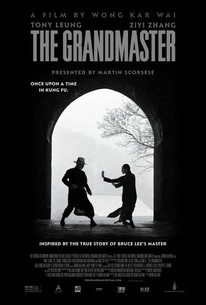 Directed by acclaimed filmmaker Wong Kar Wai, THE GRANDMASTER is an epic action feature inspired by the life and times of the legendary kung fu master, Ip Man. The story spans the tumultuous Republican era that followed the fall of China's last dynasty, a time of chaos, division and war that was also the golden age of Chinese martial arts. Filmed in a range of stunning locations that include the snow-swept landscapes of Northeast China and the subtropical South, THE GRANDMASTER features virtuoso performances by some of the greatest stars of contemporary Asian cinema, including Tony Leung and Ziyi Zhang.(c) Weinstein

Chen Chang
as The Razor

Critic Reviews for The Grandmaster

The Grandmaster strikes me as Wong's strongest film since In the Mood for Love and surprisingly credible as an exercise in kung fu stylistics as well as temps perdu.

The Grandmaster interweaves themes of ancient loyalty and modern betrayal around a narrative predicated upon the interplay between the differing schools, traditions and movements of myriad martial arts disciplines.

Each punch, kick and impact is captured cleanly and coherently, Wong serving the spectacle of a big brawl rather than resisting its adrenalised charms.

The Grandmaster is an anomaly -- a mournful and delicate kung-fu movie with hardly a trace of machismo about it.

Wong Kar-wei's The Grandmaster is one of the more exquisite martial arts movies around, as the Hong Kong auteur behind the lyrical In the Mood for Love takes on the legend of Ip Man.

As a film-maker, Wong appears to be retreating upriver into genre, style and mannerism. It is all managed very elegantly - but with a fraction of the power in his greatest work.

A case of style over substance. But, oh my, what style.

[The American Cut] wants to fit itself within the confines of a specific genre, but the director is one whose ambition transcends beyond that.

It is a poetic martial arts epic, crowded with philosophical dialogues that makes one meditate on the issues surrounding the destiny and tradition of an art. [Full review in Spanish]

The Grandmaster is both masterful and a masterpiece.

Wong has crafted a stunning spectacle, a film that employs some of the most arresting martial arts sequences perhaps ever put to film. But neglecting to clearly relate to us the life and times of Ip Man reduces the film to a fragile bauble.

Ultimately, it's a kung fu film about wit and cunning and life and art and love. The focus is on the relationships between these characters, and the historical fiction element serves merely as a backdrop.

Audience Reviews for The Grandmaster

Wong Kar-Wai seems only concerned about his irritating aesthetics in this hugely unfocused mess that even includes a useless narration and inexplicably irrelevant characters like The Razor - not to mention the use of a theme from Once Upon a Time in America for no clear reason.

The cinematography, no matter what the screenplay is like, how the acting is, or even if the direction was awful, really sold me on this film. Everything technical needs to be praised before any negativity, because this films' visuals will blow your mind. I could not look away from the screen at any moment during the fight sequences, because the choreography and camera work was so beautiful and deserves it's Oscar nomination. Now on to the story. It is a very well-told and well-paced screenplay, but the film is a lot of style, and seems like it overshadows everything. To me, it took me out of the film's messages a bit, but that is always why it has it's nomination, so it's a bit of a tug of war. The acting is very good and the direction is not bad, although it seems he left it up to the cinematographer to plan the action sequences for him. At it's core, this film centers the Ip Man, who would move onto his later years after this film, to be Bruce Lee's trainer. I will definitely recommend this film to people who enjoy true stories or martial arts, but I think that is as far as it will reach. I really enjoyed watching this film though!

the storytelling was disjointed, the locations limited, and the characters were dull and underdeveloped. this film suffered from a lack of awareness of time and environment. however it was saved by some stunning fight sequences and solid performances. overall, solid watching but missed a chance to be great.