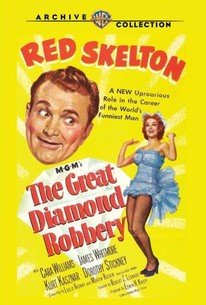 he beloved funnyman portrays diamond cutter Ambrose C. Park (the middle initials stands for "Central") in The Great Diamond Robbery. Park is eager to demonstrate his talent to his employer by working on the rare Blue Goddess diamond. It's a delicate task. One mistake and the gem will be worthless. Two mistakes: it'll be worthlesser! But Park confidently takes on the job, accompanied by criminals who have convinced him they're his long-lose family and who secretly aim to steal the diamond after it's cut. Will Park find out he's being hoodwinked before it's too late? Most certainly. And that's when the antic finale begins...

There are no critic reviews yet for The Great Diamond Robbery. Keep checking Rotten Tomatoes for updates!

There are no featured audience reviews yet. Click the link below to see what others say about The Great Diamond Robbery!