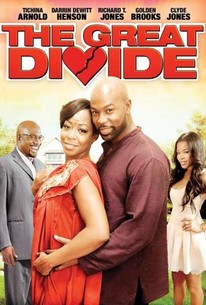 A heated game that pits men against women turns a civil get-together into an all-out warzone in this battle of the sexes comedy directed by Ibrahim Yilla. Once a month, Tosha Landry (Tichina Arnold) and her husband host a laid-back gathering for their diverse group of friends. This month, Tosha is in the midst of working on her research paper. In order to complete it, she devises a little game to be played by the couples. Meanwhile, as the competition turns fierce, the dividing line between the genders becomes too clear to ignore, and relationships are put to the ultimate test. Richard T. Jones and Golden Brooks co-star.

Critic Reviews for The Great Divide

There are no critic reviews yet for The Great Divide. Keep checking Rotten Tomatoes for updates!

There are no featured reviews for The Great Divide at this time.