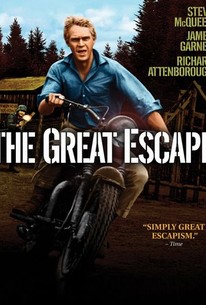 Critics Consensus: With its impeccably slow-building story and a cast for the ages, The Great Escape is an all-time action classic.

Critics Consensus: With its impeccably slow-building story and a cast for the ages, The Great Escape is an all-time action classic.

Critic Consensus: With its impeccably slow-building story and a cast for the ages, The Great Escape is an all-time action classic.

Based on the book by Paul Brickhill, The Great Escape is the true story of Allied prisoners plotting to break out of Nazi detention camp. Bartlett (Richard Attenborough) is the British officer who masterminds the escape. Out of 250 prisoners, only 76 manage to escape, and the number soon dwindles to two dozen. Hilts (Steve McQueen) and company must get through Nazi occupied territory, which is the premise for most of the film. McQueen rides a motorcycle through heavy gunfire in a spectacular action sequence to avoid certain death at the hands of the enemy. James Garner, Donald Pleasence, Charles Bronson and James Coburn also star in this exciting, suspenseful action adventure. Although he had appeared in other previous film, this is the one that brought superstar status to Steve McQueen. The handsome, brooding actor performed all his own stunts in the action sequences in the type of action adventure film that became McQueen's trademark.

Angus Lennie
as "The Mole" Ives

Robert Desmond
as "The Tailor" Griffith

Til Kiwe
as Frick

News & Interviews for The Great Escape

View All The Great Escape News

Critic Reviews for The Great Escape

For all its missteps, when it comes to escapism, intrigue, and indulgence, you could do a whole lot worse than The Great Escape. Just watch it with an open eye.

This is a Boys' Own Tale, and, as boys, we wanted it, cleansed of horrors, for ourselves.

An exceptional story about teamwork.

Way too flabby at 168 minutes, but once this 1963 feature gets going it's good, solid stuff.

There is something undeniably quaint about John Sturges' sprawling 1963 World War II epic...

The courageous, booming march by Elmer Bernstein that opens the picture is instantly one of the most memorable and notable pieces of music in cinema history.

McQueen's thrilling motorcycle ride has long been the stuff of cinematic legend, but the movie is packed with countless memorable episodes of this caliber.

This is one of the all-time great war movies, a PoW adventure from director John Sturges that celebrates the indomitable spirit of the Allied forces even when their backs were to the wall.

Watching the starry cast is always entertaining, and while The Great Escape has little new to say about war, this is really not a criticism.

Even if you feel you know every scene backwards, there are still manifold pleasures here beyond nostalgia.

Audience Reviews for The Great Escape

The Bank holiday classic. Didn't watch it for ages but once I did I found it was a pretty good story loosely based on a true story of P.O.W.s escaping from their prison camp during the second world war.

There's some WW2 movies that go for the point of view of 1) some important job that HAS to be done, and/or (it could be both) there's the ones that go for 2) the horror of war. And then there's what I call the "I remember World War 2" films wherein the war is seen through the subtle patina of nostalgia. "Those were the good old days!" This film is solidly in the second camp, as if two hours into the 20 year high school reunion some slightly inebriated few begin to wax teary-eyed about the day of the big game oh those many years ago. One very nearly roots for the bad guys.

By investing good part of its narrative in the many particulars of the great escape planning, this outstanding prison break movie increases our connection with a large gallery of memorable characters, making us deeply care about its consequences in a tense, breathtaking final act.

What a magnificent piece of classic cinema! Everything from the acting to the music is just pure artistic gold. What's even more amazing is how the details and execution of this ingenious escape from a Nazi POW camp, is all based on true events. An even better reason to see it though, is the outstanding cast. You got Steve McQueen, Charles Bronson and a countless number of other brilliant thespians, whom are now legends of their time. Each and every one giving it their very best, which even further amplified the power of this incredible story. With this and "Papillon" (another prison escape film starring Steve McQueen) in recent memory, I honestly regret to have waited so long with seeing these classics. They house a soul of unparalleled intelligence, and rows upon rows of beautifully written characters, which is something we rarely get in their modern equivalents. Indeed it really opened up my eyes to a whole new treasure trove of golden oldies, which I've been happily exploring ever since. And for those that are yet to discover it, may I suggest that you relish the same opportunity. http://www.facebook.com/pages/Mikes-Movie-Reviews/281824101875153?ref=hl