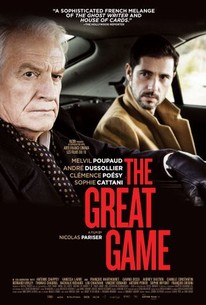 Pierre (Melvil Poupaud), a onetime darling novelist disgusted with the publishing world, lets a duplicitous government insider (André Dussollier) tempt him into ghostwriting a manifesto designed to transform the landscape of French public opinion-a shift with risky consequences for the activist (Clémence Poésy) with whom he soon becomes involved. Nicolas Pariser's debut feature is an elegant political thriller that makes much use of its stellar cast, particularly with the brittle, uneasy rapport between Poupaud and Dussollier, a resourceful and protean actor who commits to his character's malevolence with relish.

A sophisticated French melange of The Ghost Writer and House of Cards, The Great Game (Le grand jeu) is a steadily engaging slow-burner that somehow never quite manages to catch fire.

[The Great Game unfolds] in the same moral gray area as Michael Clayton, where ethical compromises resonate louder than gunshots.

There are no featured reviews for The Great Game (Le grand jeu) at this time.