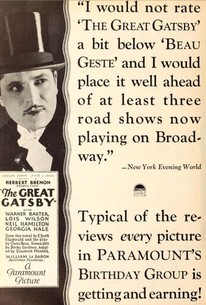 Critics Consensus: Dutifully adapted by director Herbert Brennon, The Great Gatsby faithfully enacts all the novel's prose -- but alas, it captures none of its poetry.

Critics Consensus: Dutifully adapted by director Herbert Brennon, The Great Gatsby faithfully enacts all the novel's prose -- but alas, it captures none of its poetry.

Critic Consensus: Dutifully adapted by director Herbert Brennon, The Great Gatsby faithfully enacts all the novel's prose -- but alas, it captures none of its poetry.

Accurately described as "a beautiful job" by novelist John O'Hara, this 1926 silent version of F. Scott's Fitzgerald's The Great Gatsby stars Warner Baxter in the title role. Self-made millionaire Jay Gatsby lacks only one thing in life: the love of the beautiful, impulsive Daisy Buchanan (Lois Wilson). Gatsby's carefully laid scheme to announce his intentions to take Daisy away from her cloddish husband Tom Buchanan (Hale Hamilton) goes horribly awry, setting the stage for the inexorable tragedies that follow. Georgia Hale, previously seen as Chaplin's vis-a-vis in The Gold Rush, is cast as Buchanan's pathetic low-life mistress Myrtle Wilson, while Neil Hamilton exudes dependability from every pore as Gatsby's loyal friend Nick Carraway. Among Fitzgerald adaptations, the 1926 Gatsby was actually filmed during the historical period it depicts (which wasn't historical at all back then). The property was remade in 1949 with Alan Ladd, then again in 1974 with Robert Redford.

Critic Reviews for The Great Gatsby

It has the usual theatrical deficiencies of stories not originally conceived for the stage; but Owen Davis has adapted it very adroitly, keeping as much of the original dialogue as possible and filling in the gaps with intelligence and a happy invention.

Most of the rest of Scott Fitzgerald's splendid story is brought out in the picture, but somewhere, in the translation into a mile of celluloid, the finer parts of the typed version have been lost.

It is well done, but many persons will wonder whether it was worth doing at all. Seeing it will make nobody happy, nor will it send anybody away feeling more fit to battle against his own troubles.

Fitzgerald has certainly exposed to the public view modern life as one strata of society lives it. And the producers of the picture have made the presentation mode vivid.

An interesting and intelligent picturization of a good novel.

In attempting to satisfy the limited group who have applauded Fitzgerald's novel, and also the unlimited group who wouldn't read the book on a bet, Mr. Brenon has fallen between two stools.

[Gatsby] emerges from the picture, much as he did from the book, a lonely, intensely interesting figure.

It is by all odds one of the finest dramas of this season. In it Warner Baxter blossoms out as an actor of depth and feeling.

F. Scott Fitzgerald's novel of the great war's aftermath presented unusual film difficulties. Herbert Brenon, the director, has managed to retain much of the feeling of the story.

Herbert Brenon has gone about misinterpreting F. Scott Fitzgerald's novel to the very best of his ability.

I think The Great Gatsby is pretty much flop. Further, I think the director flopped it.

There are no featured reviews for The Great Gatsby at this time.