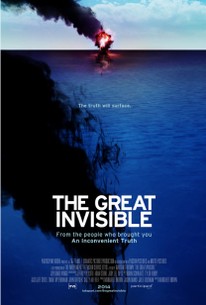 Critics Consensus: Empathetic, smartly crafted, and ultimately devastating, The Great Invisible offers a deep and expansive look at the causes and effects of American energy policy.

Critics Consensus: Empathetic, smartly crafted, and ultimately devastating, The Great Invisible offers a deep and expansive look at the causes and effects of American energy policy.

Critic Consensus: Empathetic, smartly crafted, and ultimately devastating, The Great Invisible offers a deep and expansive look at the causes and effects of American energy policy.

On April 20, 2010, the Deepwater Horizon oil rig exploded in the Gulf of Mexico in a blaze of fire that could be seen 35 miles away, killing 11 workers and causing the worst oil spill in American history. THE GREAT INVISIBLE, the first comprehensive overview of the incident and its aftermath, is the result of four years that Alabama-born Brown spent traveling in the small towns and major cities all around the Gulf, talking to those affected. With an eye for unforgettable characters, Brown gained the trust of a wide range of people- from industry insiders to small-town fishermen, from lawyers administering BP's faulty compensation fund to the shell-shocked survivors of the initial blast (one of whom provides chilling first-person video taken onboard the Deepwater Horizon in the days leading up to the disaster). Together, their testimony adds up to a damning portrait of an industry whose lack of government oversight led to unthinkable catastrophe - a lack of oversight that has not changed, despite the widespread outrage at the time. (C) Radius-TWC

News & Interviews for The Great Invisible

View All The Great Invisible News

Critic Reviews for The Great Invisible

To the filmmakers' credit, the points of view in The Great Invisible are comprehensive and varied, though it's clear who they view as the good guys and bad guys here.

Brown seamlessly blends the emotional, intimate stories of people with bigger pictures, using the explosion as the starting point for a ripple effect that just keeps growing.

Most of all, it's a sobering look at a part of coastal America that will never be the same again.

The Great Invisible is a reminder that the problem of offshore drilling, and our energy policy in general, is still a bubbling pot.

The film acknowledges [the] instinct toward simplistic polarization, but then softly, compellingly tries to push against it.

When viewed through the eyes of someone living in 2020, one begins to notice a pattern concerning corporate influence over disaster response.

[Margaret Brown] simply, masterfully, lays out the threads of the situation in front of us in such a way that what we thought we knew is made devastatingly urgent and new.

It does answer an awful lot of questions, disturbingly showing how far we have not come in making progress towards low carbon energy sources.

A smartly assembled film offering an on-the-ground look at the lingering fallout of the historic BP oil spill -- and at America's troubling relationship with Big Oil.

A documentary on the Deepwater Horizon oil spill of 2010 shows that nothing has changed except the oil is still in the ocean and the lives of those who live closest to the spill are much worse.

The Great Invisible is a stirring, sad, and well-made account of a catastrophe that will be haunting us for decades, whether we believe it or not.

Audience Reviews for The Great Invisible

There are no featured audience reviews yet. Click the link below to see what others say about The Great Invisible!