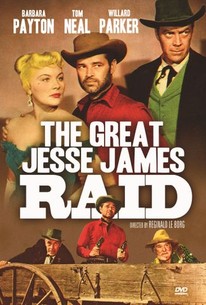 In this western, a mixture of truth and myth, the last great raids of Jesse James are chronicled as he attempts to rob the Colorado gold mines. He is assisted by his old gang mate Bob Ford who actually sets the robbery up. It is Ford who convinces James to come out of retirement to pull the caper. James quickly begins reassembling his gang. Later the new James gang discovers the whole thing was a set-up. In the end, the outlaws fail to get the gold and end up riding off in different directions.

Tommy Walker
as Jesse James as a Youth

Margo Woode
as Zee
View All

There are no critic reviews yet for The Great Jesse James Raid. Keep checking Rotten Tomatoes for updates!

There are no featured reviews for The Great Jesse James Raid at this time.