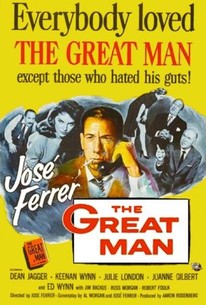 Based on a novel by television producer Al Morgan, The Great Man is a Citizen Kane-style look at the private life of a public figure. The Great Man is a beloved radio and television personality who dies suddenly. José Ferrer (who also directed) plays a writer/commentator who has a chance to break into the Big Time by preparing a eulogistic broadcast concerning the deceased celebrity. As he interviews the various people who knew the Great Man on the way up (including Julie London and Ed and Keenan Wynn) he learns that the "idol of millions" was actually a conniving, duplicitous scoundrel who stepped on everyone in his path and who took credit for the hard work of others. Warned by his boss (Dean Jagger) that his career will be ruined if he tells the truth, Ferrer nonetheless takes to the airwaves with a "warts and all" biography--and the results are surprising only to those with no cynicism in their souls. The Great Man stirred up a sensation in 1956 because it was perceived to be an a clef study of the enormously popular (and ruthlessly powerful) media star Arthur Godfrey.

Critic Reviews for The Great Man

The movie is better than AÍ Morgan's novel, on which it is based, and has a special irony in the revised ending.

There are no featured reviews for The Great Man at this time.