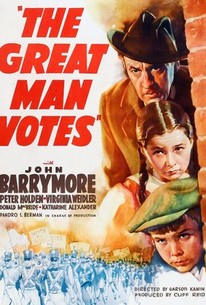 Ageing, alcohol-benumbed John Barrymore had one last great performance left in him before his death in 1942, and The Great Man Votes was the ideal vehicle for that performance. Barrymore plays a widowed, once-distinguished professor, lately reduced to being a night watchman. He tries to stay off the "hard stuff" for the sake of his two small children, Virginia Weidler and Peter Holden, but his lack of responsibility nearly loses him the custody of both kids. Meanwhile, scheming politico Donald MacBride discovers that his winning the upcoming mayoral election hinges upon one single vote--and guess whose vote that is? With "VIP" status suddenly thrust upon him, Barrymore regains his children, his former status in life, and (as a last-minute plot twist reveals) his self respect. Director Garson Kanin was so anxious to extract a good performance from John Barrymore that he ordered everyone on the set to treat the fading matinee idol with deference and respect. Unaccustomed to such treatment in his later years, Barrymore looked around the set and bellowed, "Which Barrymore do you think I am, Lionel?" Despite his precarious physical condition and his reputation for temperamental outbursts, Barrymore was the soul of cooperation on the set. His fiery temper flared only once, when child actor Virginia Weidler calculatedly attempted to steal a scene from him. Though appalled at the spectacle of The Great Profile profanely chewing out the tiny Weidler, Kanin admitted in retrospect that Barrymore was absolutely right: the kid was intruding on one of the star's soliloquies, and nobody did that to John Barrymore.

Granville Bates
as The Mayor

There are no critic reviews yet for The Great Man Votes. Keep checking Rotten Tomatoes for updates!

There are no featured audience reviews yet. Click the link below to see what others say about The Great Man Votes!