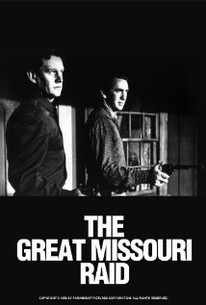 The Great Missouri Raid stars Wendell Corey and MacDonald Carey as famed Kansas outlaws Frank and Jesse James. Once more, the James Boys are depicted sympathetically as victims of circumstance forced into a life of crime. Joining Frank and Jesse on their bandit raids are the Younger Brothers, portrayed by Bruce Bennett and Bill Williams. The heavy of the piece is Union major Trowbridge (Ward Bond), who seeks vengeance after Frank and Jesse kill Trowbridge's brother in self defense. Whit Bissell is appropriately furtive and beady-eyed as Bob Ford, the "dirty little coward" who'd eventually shoot Jesse in the back. Interestingly enough, Wendell Corey would play Jesse James along more villainous lines in the 1959 Bob Hope farce Alias {%Jesse James}. ~ Hal Erickson, Rovi

There are no critic reviews yet for The Great Missouri Raid. Keep checking Rotten Tomatoes for updates!

There are no featured reviews for The Great Missouri Raid at this time.