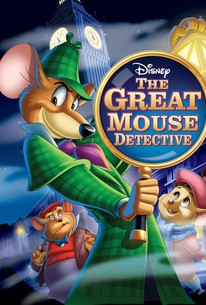 Critics Consensus: The Great Mouse Detective may not rank with Disney's classics, but it's an amiable, entertaining picture with some stylishly dark visuals.

Critics Consensus: The Great Mouse Detective may not rank with Disney's classics, but it's an amiable, entertaining picture with some stylishly dark visuals.

Critic Consensus: The Great Mouse Detective may not rank with Disney's classics, but it's an amiable, entertaining picture with some stylishly dark visuals.

This animated children's film spoofs the Sherlock Holmes legend by recasting the major characters as rodents. Basil, the Great Mouse Detective, and his companion Dr. Dawson must use their powers of deduction to foil the world domination plans of the scheming villain Ratigan.

Older kids may be less enthused by this mousy story, though parents, particularly Basil Rathbone fans, will marvel at the accuracy with which this sophisticated homage hits Holmes.

There's no need for details - you know his methods, Watson - but suffice it to say that The Great Mouse Detective's few tunes are unmemorable and all the action (aside from the inventive chase sequences) is snooze-worthy.

"The Great Mouse Detective" reflects the energy and enthusiasm of a talented group of young artists stretching their wings for the first time.

The genuinely witty and endearing disney animation that everyone forgets.

As usual with film noir, however, it is the villain who steals the heart and one is rooting for in the breathtaking showdown high up in the cogs and ratchets of Big Ben.

Small children may be afraid of some of the bad characters -- the Disney Studio's gift for creating really nasty bad guys means that they are scary -- but they will love the cute, brave mice and cheer their triumphs. Adults will enjoy the wit and style.

The characters are all very well devised and the plot is enormously unique.

The Great Mouse Detective is Disney's definitive revitalization starting point. While incomplete, it was this vision that would make them viable again.

While it is clearly not the most ambitious or flamboyant, it is an engaging 72 minutes worth of fun for kids and easy to take for their chauffeurs.

An attractive idea, but rather crudely done for Disney animation...

Of all of [Disney's] properties this would be one that I would say do a sequel.

Ranks among the barely passable Disney animated movies of the '70s and '80s (most), as nothing in it feels really sufficient - not the amount of Vincent Price (whose character appears very little), nor the amount of songs (though the few ones are nice), nor the level of fun.

There are some thrilling and memorable moments (the climax) and songs ("Let Me Be Good to You" and Vince Prince's delightful "Goodbye So Soon"), but it is an ultimately forgettable, unfortunately average Disney film. It is admittedly sad, however, that the charming moments the film does have to offer go unnoticed by Disney fans due to the film's lack of colorful--or even sympathetic--characters. In the end, while clever, the characters are actually quite one-dimensional, leaving the film a little empty. Henry Mancini's score for the film, however, is brilliant and underrated.

Basil: Ratigan, no one can have a higher opinion of you than I have, and I think you're a slimy, contemptible sewer rat!  "Can he bring the dirty rat to justice?" The Great Mouse Detective is fun from start to finish for me as an adult. Unfortunately, I never got the chance to watch this during my childhood, but I can guarantee it will be a staple of my children's childhood. The movie is perfectly paced and a perfect length to keep the kids attention throughout. Also, the film doesn't have so many songs that it kills the overall flow of the story. That's something I really appreciate from a children's animated movie. So many of these movies throw song after song at the audience and to me, that just ruins the pace of the film. In this one, there are only a few songs throughout, and the ones that are in it are actually quite good. The Great Mouse Detective follows a story of a Sherlock Holmes like mouse named Basil, his new assistant Dr. Watson, and a little girl. The little girl's toy making father was kidnapped by the always elusive and highly sinister rat, Ratigan. Basil has been after Ratigan for a long time, so he jumps at the chance to solve the case. Ratigan's motive for kidnapping a toy maker involves his overall plan to overthrow the queen and take complete power.  There's a lot of stuff to like about this one. It has a great, London late 1800's atmosphere to it. The voice cast does a phenomenal job. The animation looks great and the set pieces are extremely well done. There really isn't anything to complain about. This is definitely a new favorite of mine when it comes to Disney films, and it's just a shame that it isn't more well known.