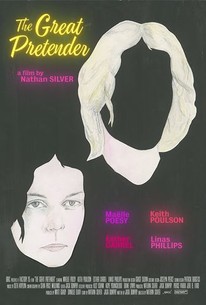 THE GREAT PRETENDER is a roundelay set in the off-off-Broadway world of New York theatre. Trying to exorcise her past, lovesick French director Mona comes to America to mount a play based on her last relationship: a tumultuous affair with hard living street photographer Nick. For the on-stage rendition of her real-life story, Mona casts seemingly naïve French actress Thérèse to play herself and bumbling Brooklynite Chris to play Nick. Mona develops feelings for Chris, Chris falls madly in love with Mona, while Thérèse falls in love with Chris. The film is told in five chapters, each centered around a different character, culminating in the production of the play.

Critic Reviews for The Great Pretender

Self-delusion is the principal subject of this short, acerbic comedy by Nathan Silver.

Flashbacks and fantasies, plus wry inserts of film clips and complex overlaps of art and life, adorn-for that matter, overwhelm-the story, which is built on flimsy psychological clichés amid the implacable imperatives of desire and disease.

The energetically crafted, well-acted movie about characters one would go to considerable extremes to avoid in real life is turning into a veritable indie micro-genre.

The punchlines are dark and the tone is caustic, but its central concern is a classic one: what we see in other people and how we would like to see ourselves.

This film is a beautiful and beguiling art object.

Unfortunately, as with so many of Silver's films, the endless self-absorption of the characters on display quickly wears thin.

Silver has done something really special with all of this, bringing the stories of these four people together in a sort of relationship mélange that speaks to the ways people can't help but miss the forest for the trees.

The offhanded, piercing quality of the comedy within the viper's nest of romantic roundelays suggests a cruel Alan Rudolph, and that's more than enough for me.

The Great Pretenders fails at every genre it pretends to be.

The Great Pretender manages to illustrate the irrefutable truth that life and romance is messy, but also quite entertaining.

There are no featured reviews for The Great Pretender at this time.