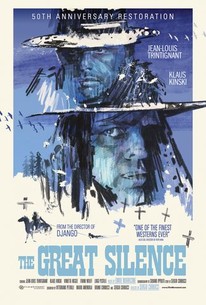 Italian filmmaker Sergio Corbucci directed this serious-minded populist spin on the spaghetti western, starring Jean-Louis Trintignant as Silence, whose vocal cords have been slashed by sadistic bounty-hunters. Silence joins with local hillfolk in fighting the corrupt and tyrannical authorities in the town of Snow Mill. Corbucci's sympathies are clearly with his bandit heroes, who are only doing what they must to survive, while the law is represented by a corrupt sheriff, who lets his wealthy patrons run wild, and sadistic scum like Klaus Kinski, who kills the poor because he enjoys it. Politically charged in a way that only a film of its time could be, Il Grande Silenzio's themes of class struggle and violent revolution were a bit too hot for an American release in 1968. Vonetta McGee co-starred with genre regulars Frank Wolff, Luigi Pistilli, and Raf Baldassare.

Loris Loddi
as Silence as a Boy

Benito Pacifico
as Coachman
View All

Nothing works out the way these people, not to mention audiences who love classic Hollywood westerns, expect. Not even close.

The mood is sometimes jaunty, but "The Great Silence" is no joke, and the fatalism of its ending serves as an implicit critique of the sentimental optimism of many Hollywood westerns.

Corbucci constantly subverts the generic tropes that he dabbled with two years earlier in Django, that blood-soaked and oft-imitated riff on A Fistful of Dollars.

The Great Silence is, quite simply, one of the best Spaghetti Westerns ever made

Gorgeous to look at, "Shane" lean in its narrow focus and romance and Peckinpah-bloody in its violence.

Something must also be said about the wintery setting - a rare choice for a Western.

With the help of a typically stellar score from Ennio Morricone, The Great Silence is one of the prettiest, most thoughtful movies you'll ever see with a body count in the dozens.

Corbucci's terse, elemental and rugged direction compliment a world shook by corruption and evil, and plagued by treachery so pervasive it enfolds as powerfully through its cold setting as does its even colder characters.

It is simply, breathtakingly bleak.

Make no mistake, the ugliness of violence and greed comes through a dark, savage story with an incredibly brutal conclusion.

Even 50 years later, The Great Silence stands majestically as both a blistering comment about its era and a creatively revisionist genre piece.

It's been called "great" and "Corbucci's masterpiece." It just might be.

I'm no expert on the genre of Spaghetti Westerns, but this ranks, I feel, as an excellent example. The cinematography is absolutely brilliant-bleak, stark, and quite stunning- a true visual delight. Jean Louis Trintignant and Klaus Kinski are superb in their respective roles of a mute gunfighter who stands up for what's right and the sadistic bounty hunter he goes up against. Another highlight to the film is Ennio Morricone's score. It's not as good as the scores he did for Sergio Leone's Spaghetti Westerns, but it's still pretty awesome. I liked how the film didn't pull punches with the content, especially the ending, and give it props for having an interracial love scene in an era where that was still something very uncommon and bold. All in all, this is a very off-beat and different film, even for a Spaghetti Western. Go check it out.

Certainly the most bleak spaghetti western. If you think about it, that is saying a lot.

The beauty of Il Grande Silenzio is that it tells such a dark tale in the most straighfoward manner possible. It forgets about the western myths and goes for the crude aspects of this world. Silenzio is not a hero, just a man defending himself, Loco is not a cartoonish "bad guy", just somebody doing his job. With bountys over the heads of poor people trying to survive private property becomes more valuable than human beings. When the ending arrives it never feels forced or out of logic. It was the only way in which this story could be finished. There are no heroes here, just another pile of nameless corpses, and somebody with more money in the pocket.

A really drawn out Spaghetti Western epic and completely different from anything else the genre produced. It has a great snow-covered backdrop set at the end of the old west, where the bounty killers rule. Klaus Kinski plays an amazing villian, essentially a more devious and smarter version of his hunchback character from For A Few Dollars More. I really do think this was made way ahead of its time because in many ways it marks the end of the genre. It's very similar to Unforgiven.