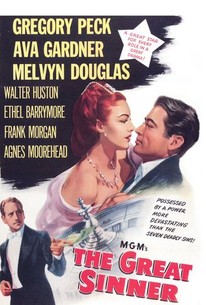 Based loosely on the Dostoyevsky novel, The Gambler stars Gregory Peck as a sensitive 19th-century Russian author. His "great sin" is gambling, which starts when he attempts to rescue aristocratic Ava Gardner from the gaming tables. He succeeds, only to lose himself to gambling fever, which costs him his friends, his reputation and his talent. Director Robert Siodmak was never happy with the screenplay for The Great Sinner, constant revisions bloated the film's rough-cut running time to nearly six hours! After Siodmak pared the film down, MGM insisted that the director reshoot the love scenes. Siodmak refused, thus the new sequences were filmed sans screen credit by Mervin LeRoy.

Elsa Heims
as Woman with Cigar

Charles Wagenheim
as Man with Ring

Walter Rode
as Couple in Room

June Booth
as Couple in Room

John Cortay
as Inspector
View All

Critic Reviews for The Great Sinner

Brings Dostoyevsky down to the level of soap opera.

Audience Reviews for The Great Sinner

There are no featured audience reviews yet. Click the link below to see what others say about The Great Sinner!